Office of the State Pathologist confirmed the skeletal remains were human 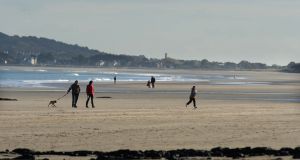 Gardaí are investigating the discovery a severed foot found by a man on Portmarnock Beach in Dublin.

The man was walking the beach on the morning of October 20th when he spotted the skeletal remains washed ashore and immediately contacted the gardaí.

They examined the remains and confirmed it was human. A number of tests have been carried out on the foot.

A spokesman for the Gardaí said the investigation was ongoing but it not being treated as suspicious at this stage.

Two weeks ago a driver reported seeing an “arm or foot” sticking out of the water in the canal near the Ardnacrusha power station in Co Clare.

It was called off after two days when nothing of significance was found.