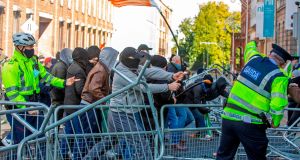 Groups of protesters and counter-protesters clashed in Dublin on Saturday at an anti-lockdown demonstration. Photograph: Paul Faith/ AFP

There has been widespread condemnation of the violent clashes between protesters and counter-protesters at a weekend anti-lockdown demonstration in Dublin city centre.

The confrontation between protesting anti-lockdown groups, including the right-wing National Party, and a group of counter-protesters, some of whom described themselves on social media as communists, took place over two hours on Saturday afternoon in the Kildare Street Molesworth Street area.

11 Winner of €10.7 million Lotto jackpot yet to come forward, but shop named

15 Robbie Williams: I haven't had a drink for 19 years

17 Covid-19: 15 teachers forced to self-isolate after outbreak in Limerick school

18 Hilary Fannin: I developed a foreboding about being released from lockdown

25 Will the Covid-19 vaccine mean a return to the office and dreaded commuting?

28 Brexit: Result from talks ‘expected in hours or days’ but EU members could reject proposal

30 Plenty at risk for Ireland in Brussels brinkmanship

33 Jackie Tyrrell: Every corner-back is an island now

38 A cherry blossom’s secret: The untold story of a kamikaze pilot