Why was notorious Dutchman hiding out in Kinahan safe house?

Dutch and Irish police want to know, but Naoufal Fassih – aka the Stomach – isn’t talking 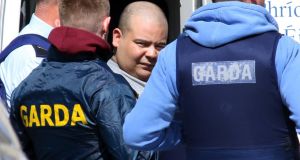 Naoufal Fassih: The Dutch-Moroccan is escorted from the High Court on January 27th. Photograph: Courts Collins

Naoufal Fassih’s nickname among those whom he allegedly commissioned to pump bullets into Peter Raap is “Buik” – Dutch for “stomach”.

It is not hard to see why: Fassih, who is Dutch-Moroccan, is short, swarthy and enormously overweight. His shaven head appears to bypass the usual anatomical detail of a neck and rise directly out of his shoulders.To say that Fassih’s girth matches his height would be an exaggeration, but not by much.

He leaned forward to speak just once, when the barrister for the State mentioned in passing that Fassih had been arrested last April in an apartment in Baggot Street that was connected to “a well-known criminal organisation”, later elaborated to be the Kinahan gang.

“Which connection?” blurted Fassih, as his own barrister shushed him quiet with a wave of his arm.

The reason why Fassih was in Dublin is not known to anyone but himself, but Dutch police, who had been looking for him in the Netherlands, Dubai, Spain and Morocco, were as surprised as the gardaí who called to the flat on April 7th, 2016 and the door was opened by the Stomach.

The gardaí had no idea who he was when they went there, having found a utility bill for the flat on a known associate of the Kinahan gang. He had been stopped and searched during a city-wide clampdown as the Garda sought to stem the gang’s murderous feud against the Hutch gang.

Inside the flat, they found a fake Dutch passport, a fake Belgian identity card, phones, memory keys, €12,825 in cash, £300 in sterling, and three designer watches worth up to €90,000. Fassih was also wearing €800 designer trainers.

Gardaí also found a photograph suggesting that Fassih visited Dublin Zoo with his one-year-old son in the late summer or early autumn of 2015. Dutch police now believe Fassih had been in the city for about nine months, using the Kinahan-linked apartment as a safe house while on the run.

It is not known if Fassih did any work for the Kinahans while in Dublin, or indeed what his connection to the gang is. But the Dutch think he is “very, very close” to them, according to a source in the Netherlands.

Certainly, Fassih’s own alleged track record suggests he would be at home with the Kinahans. This long-time gangland figure has international connections stretching between the Netherlands, Morocco, Spain and Ireland, and has been at the centre of a long-running feud between two Dutch gangs.

The violence began after a March 2012 customs seizure of cocaine, reported variously to have been 200 and 400 kilos, in the Belgian port city of Antwerp. The seizure was not reported at the time, leading the gang behind it to assume they had been ripped off by rival criminals.

One of the high-profile victims of that feud was Dutch gang leader Gwenette Martha, to whom Fassih was connected. Martha was assassinated in Amsterdam in May 2012: He died in a blizzard of 80 bullets fired from two AK-47 assault rifles as he left a kebab shop.

Fassih is alleged to have been present at another assassination, this one of Dutch-Moroccan gangland boss Samir Bouyakhrichan, known with a certain kitsch unoriginality as Scarface. According to British crime journalist Carl Fellstrom, Scarface was gunned down in August 2014 in a cafe in Benahavis, a few kilometres from the Spanish coast near Marbella.

Dutch police believe Fassih was there for the killing, along with five others. Some officers believe he may even have organised the meeting with Bouyakhrichan just to have him murdered.

Bouyakhrichan had an association with another notorious Dutch criminal, Danny Kuiters (aka Danny Daimler), one of whose gangland enforcers is Peter (or Pyotr) Raap. The attempted assassination of Raap was behind the third of three European extradition warrants facing Fassih after his arrest in Dublin.

Dutch police routinely bug cars used by criminals. What they heard from a November 4th, 2015 recording made sense a day or two later as events unfolded.

Via the bug, a woman named Wafaa Balfallah, Fassih’s girlfriend, is allegedly heard counting out €8,000 (16 separate €500 notes), which she gives to a man sitting in a car in Eindhoven. Balfallah is later believed to have flown to Dublin, from where, Dutch police say, she contacted Fassih.

The next day, Peter Raap was sitting in his car, parked on a grassy bank by a canal near his parent’s home in Dieman-Noord on the outskirts of Amsterdam. Another car with three men inside drew up alongside.

Bullets suddenly began flying at Raap’s car, puncturing the bodywork, shattering windows. Raap crawled out of a window and leapt into the canal, hiding below the surface from where he could see and hear bullets zinging into the water.

In all, 35 bullets were fired. Seven of them hit Raap who, rather miraculously, survived.

They assailants’ car drove off, but an alert witness got the registration plate and Dutch police later arrested three suspects, identified in Dutch media only as AM (aged 33), QC (26) and CS (30).

What led the police to Fassih was what they allegedly found on a Blackberry of one of the three. His contact details are listed under Buik, the Stomach.

Forensic experts managed to decipher encrypted messages between the man and Fassih. In an encrypted text exchange, the person named as Buik berates the three for their failure to kill Raap.

Inside Kevin Street Garda station after his arrest last April, Fassih protested his innocence, telling detectives the money and valuables in the Kinahan-linked apartment were not his but belonged to the owner. He was in Dublin only to see his girlfriend, he claimed.

He gave the gardaí a false name, Omar Ghazouani. It was only when his fingerprints were sent to Interpol that the Dutch came back and said that Ghazouani was in truth their man Fassih.

In Dutch law, the absence of a credible explanation for possession of such amounts is evidence of laundering the proceeds of crime, and Fassih was officially living on welfare.

In custody, Fassih was easy to handle. “He’s very amiable and pleasant,” said one garda who dealt with him.

But when the third extradition warrant arrived, the one alleging complicity in the attempted murder of Peter Raap, Fassih became agitated. “His demeanour changed,” said the garda.

The sentence for attempted murder, for which extradition Ms Justice Aileen Donnolly granted on Thursday, is up to 20 years imprisonment.