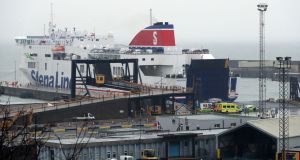 Emergency personnel at Rosslare Europort in Co Wexford, awaiting the arrival of the Stena Line ferry after 16 people were discovered in a sealed trailer on the ship sailing from France. Photograph: Niall Carson/PA Wire

Gardaí suspect 16 migrants found in a truck’s trailer on a Rosslare-bound ferry entered the trailer close to Cherbourg without the knowledge of the driver or the Irish company he works for.

While it has been suggested the men were in the trailer for five days, gardaí believe this is not the case. Detectives believe they were inside for about 15 hours before they were detected.

The Stena ferry departed Cherbourg, France, at 9pm on Wednesday, and the men were found on board just after 9am Irish time.

Gardaí believe when the driver stopped the vehicle on the approach to Cherbourg it was the most likely time for the men to climb on board.

While it is possible they paid traffickers at some point of their journey, gardaí suspect the truck they were in was chosen at random. The men also believed the truck was destined for Britain.

The driver, a foreign national living and working in Ireland for over 20 years, has been interviewed in Wexford as a witness. He has told gardaí he had no knowledge of the stowaways in the container, and he was not being treated as a suspect.

Similarly, personnel at the haulage company he works for, which is based in the southeast, were not being treated as suspects for any criminality.

Gardaí believe the migrants are Kurds from Iraq and Iran. Because of the dialects they speak, gardaí and staff attached to immigration agencies were experiencing difficulties in engaging interpreters.

All of the 14 adult males have applied for international protection, while the two juveniles were taken into State care.

The adults in the group will now be processed by the International Protection Office, which is part of the Irish Naturalisation and Immigration Service. It is thought that those who accept an offer of accommodation will be placed in the direct provision system, either in a dedicated centre or an emergency facility.

As part of the State’s asylum process identifying information such as fingerprints will be taken from the migrants and checked against databases of existing asylum applications made in the EU.

Under the so-called Dublin convention if any matches are detected they will be returned to the country where they made their original asylum application. If there are no matches they will remain in the Irish system.

Labour leader Brendan Howlin, who is a TD for Wexford, called for tighter scrutiny on all fronts, and said there was a need to ensure proper checks were carried out in ports and that they were “more thorough and vigorous”.

He added that Thursday’s incident brought back memories of the tragedy in Drinagh, Co Wexford, in 2001 when the bodies of eight people, including four children, were found in a trailer. The possibility of a tragedy remained and could happen at any time, he said.

There is understood to be growing concern among freight companies at the increasing frequency of people being discovered in trucks. One industry source told The Irish Times: “It’s an emerging trend, and changes will have to be made in terms of checks.”

Freight trade sources said they were also concerned about the growing use of refrigerated trucks by stowaway migrants.

Revenue’s Custom Service is responsible for screening the near 1.16 million freight trucks and containers passing through Dublin, Cork and Rosslare ports each year. It has four scanners that can X-ray the inside of trucks and containers, only a very small number of which can be checked.