Two men and a woman arrested during separate operations in Portlaoise 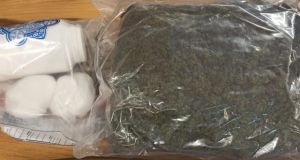 A portion of the drugs seizure. Photograph: Garda Press Office

Three people have been charged after gardaí allegedly discovered more than €500,000 worth of drugs having received reports of suspicious activity.

Responding gardaí went to an area of Rossvale in Portlaoise on Wednesday where they found a man in his 30s who they proceeded to search.

They allegedly discovered a package containing a kilogram of a substance believed to be cannabis with an estimated street value of €20,000.

The man was arrested and brought to Birr Garda station.

Gardaí attached to the Laois drugs unit carried out a follow-up search at a local property where they say they uncovered €500,000 worth of cannabis and €35,000 worth of what is believed to be cocaine. Drug paraphernalia was also found.

A man and a woman aged in their 30s were arrested and brought to Portlaoise Garda station.

On Friday, gardaí issued a statement saying the first man in his thirties who was brought to Birr station has been charged and will appear at Portlaoise district court next Thursday.