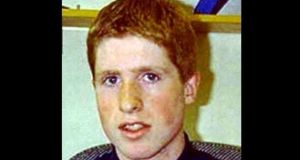 Trevor Deely: Vanished after attending a Christmas party on the night of December 7th, 2000. 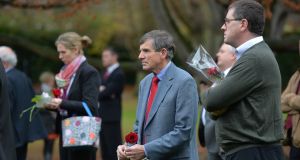 The father of missing Dubliner Trevor Deely says he is delighted that a Garda cold-case team will review the circumstances of the 22-year-old’s disappearance 16 years ago.

Michael Deely said his family had been seeking a thorough re-examination of the case.

“I’m delighted, it’s something we were looking for for the last number of years,” he said before a ceremony to commemorate missing Irish people.

“We always thought it would be useful to get a re-examination of the whole thing, go through every line and bit of information that came up.”

Mr Deely said a UK company tasked with forensically enhancing grainy CCTV footage from the night of Trevor’s disappearance had visited the family twice and were said to be “pleased” with how the process is going.

Trevor Deely never turned up for work after attending a Christmas party on December 7th, 2000.

Other families affected by missing persons cases, including some of the so-called Disappeared from the Troubles, gathered at Farmleigh House on Wednesday for a ceremony attended by Tánaiste Frances Fitzgerald.

Families of missing people including Cathal O’Brien, Philip Cairns and Esra Uyrun were given the chance to speak about their loved ones and appeal for further information on their whereabouts.

The family of Fiona Sinnott last year instigated an excavation in an attempt to retrieve the remains of the Wexford woman, who is presumed dead, following her disappearance in 1998.

Her sister Diane Sinnott spoke of her anguish at living without knowing where Fiona is and said she wished to give her sister “the decent Christian burial that she deserves”.

“Our family undertook a dig in March 2015 with blood, sweat and, in the end a lot of tears. We recovered nothing,” she said. “That was a really difficult time for our family . . . When you’re that desperate for answers you’ll do anything.”

Fiona’s family had “served a life sentence” while her sister’s killer has never been identified, Ms Sinnott added.

Attendees were given the opportunity to submit DNA samples in the form of mouth swabs to Forensic Science Ireland so they can be matched against unidentified remains found in Ireland and abroad.

Profiles from 18 missing people have been added to the DNA database since it was established last year, according to Dr Dorothy Ramsbottom of Forensic Science Ireland. This is in addition to profiles from 16 unidentified Irish bodies and more than 60 families of missing people, she said.

“By its very nature this level of detail can take time – on occasion, more time than we would like, but it is time that is necessary,” he said.