No convictions for sex or labour trafficking in Ireland in 2014, US state department finds 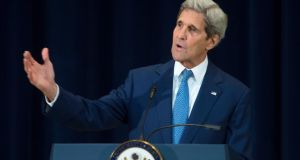 US secretary of state John Kerry presents the Trafficking in Persons Report. It urged Ireland to implement its trafficking law to ensure offenders were held accountable through convictions and dissuasive sentences. Photograph: Shawn Thew/EPA

Ireland is using anti-trafficking laws to prosecute crimes unrelated to trafficking, a US state department report has found.

The Trafficking in Persons Report, an annual review of the problem, said there were no convictions for sex or labour trafficking in Ireland last year and urged the Government to do more to identify victims.

It found that while the State fully complied with the minimum standards for the elimination of trafficking, it “continued to prosecute a high number of non-trafficking crimes as trafficking cases, including child molestation cases.”

It said potential victims of forced labour in cannabis production were prosecuted and imprisoned for crimes they may have been forced to commit.

The report, drawing on information provided by State agencies and NGOs, shows the Irish authorities initiated 79 trafficking-related investigations last year, up from 56 in 2013. Some 46 suspected victims were identified, most of them victims of sexual exploitation.

Of the victims, seven were believed to have been trafficked to work in Ireland, four were suspected of being forced to commit crime and one was thought to have been brought here to beg.

The study found that, last year, most Irish prosecutions under anti-trafficking laws involved the sexual exploitation of children as opposed to trafficking as defined by the UN, though it noted the authorities prosecuted one suspected trafficker for the sex-trafficking of Nigerian girls. “The government sustained efforts to investigate trafficking offences, but did not convict any labour or sex traffickers,” the report says.

Trafficking is an umbrella term for recruiting, harbouring, transporting or obtaining a person for compelled labour or commercial sex acts through force, fraud or coercion.

The report, published on Monday by US Secretary of State John Kerry, said Irish authorities reported a rise last year in suspected victims of forced labour, forced criminal activity and forced begging from eastern Europe, particularly Romania, as well as an increase in potential sex trafficking victims from Brazil. Ireland reported a fall in suspected victims from Nigeria.

The report noted that victims had been found in domestic service, restaurants, car washing services and cannabis cultivation. “Some domestic workers, primarily women, employed by foreign diplomats on assignment in Ireland work under poor conditions and are at risk of labour trafficking,” it stated.

The US report urged Ireland to implement its trafficking law to ensure offenders were held accountable through convictions and dissuasive sentences. It also recommended amending the law to allow asylum seekers who are victims to obtain work permits.

4 Limits on AstraZeneca vaccine will cause ‘hesitancy and concern’, Favier warns