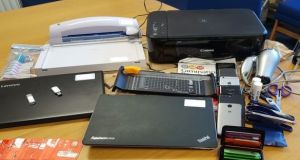 Contraband seized by gardaí during a raid on the crime network.

Gardaí believe they have discovered the financial centre of an international crime network running global frauds that target victims worldwide.

While the Irish end of the international raid targeting the gangs’ operation resulted in only one arrest, detectives in Dublin believe what they discovered during the operation was significant.

One key aspect of the inquiry has been to track and seize money defrauded from victims around the world. These people bought goods and services, such as accommodation online, only to find they had been duped.

Investigating officers believe at least €1.5 million stolen from victims of the fraud was channelled to bank accounts in Ireland. Investigations in Dublin have determined these accounts were opened under bogus identities by the fraudsters using faked documents, including passports.

Gardaí have identified the bank accounts through which some €1.5 million was channelled in the past 12 months. They had also found the base where a large number of fake documents were produced.

Three searches were carried out in the capital and false passports were uncovered along with paperwork and other items, including payment cards, linked to bank accounts opened under faked identities.

Gardaí also found equipment such as laptops, phones, printers and laminators that were being used in the manufacture of false passports. An unspecified amount a cash was also seized.

The Irish end of the operation is being run by the Garda National Economic Crime Bureau. Its officers are working in conjunction with Europol, Eurojust and other European police forces including officers in Finland.