Teenager hurt in hit-and-run in Dublin on Tuesday evening

Ford focus failed to stop after incident on Swords Road 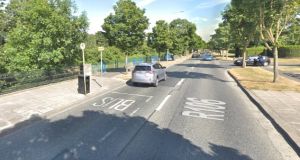 The incident happened on the R106 at the junction of Castle Heath.

A teenage boy was hurt on Tuesday evening after he was hit by a car that failed to stop.

Gardaí in Malahide are appealing for witnesses to the hit-and-run incident that happened at about 6.55pm on the R106, Swords Road outside the entrance to Castle Heath.

“A male pedestrian in his teens was struck by a car, described as a Blue Ford Focus 05 D, which failed to remain at the scene,” a statement from the Garda Press Office said.

“It is believed this car travelled in the direction of Swords following the collision.”

The boy was taken to Temple Street Children’s Hospital where his injuries are not believed to be life threatening.

Gardaí are appealing to motorists who were on the Swords Road at the time of the incident to come forward, particularly those may have dash cam footage. They also want the driver or any occupants of the car to come forward.