Thousands escape penalty points due to glitch in law 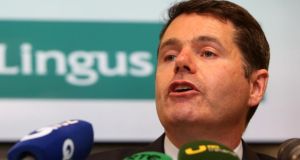 Fourteen new penalty point offences introduced last year cannot be correctly applied to driving licences when a motorist is convicted in court because of a legal loophole.

The Irish Times has learned the commencement order, making it an offence for a driver appearing in court charged in connection with one of these offences to fail to provide a copy of their licence, has yet to be signed into law.

This means there is no legal sanction for drivers convicted of these offences in court who do not surrender their licence and means they may escape having penalty points applied.

A spokesman for Minister for Transport Paschal Donohoe said the commencement order would be signed into law shortly.

Among the new offences introduced last December was the failure of a learner permit holder to be accompanied, failure to display an N or L plate, illegal U-turns and driving an illegally modified vehicle.

Drivers failing to bring their licences to court so penalty points can be applied on conviction is a long-standing issue.

According to the Courts Service last year 21,709 drivers were convicted of a penalty point offence. Of these, only 8,059 had their licence number recorded.

In an attempt to deal with the issue, in 2011 it was made an offence for a motorist to fail to bring their licence to court for a road traffic cases.

However, enforcement is a problem and to date no motorist has been convicted of the offence, which is punishable by a fine of up to €1,000.

A spokesman for the Department of Justice said gardaí had recently initiated a number of prosecutions against drivers who had failed to bring their licence to court as part of a crackdown on the practice.

Minister for Justice Frances Fitzgerald said last month “there must be no way out for anybody seeking to avoid getting penalty points”, adding that prosecution of offences in this area was “critical to public safety and to reducing deaths on our roads”.

regularly attended court sittings and saw widespread evidence of drivers ignoring the requirement to bring a licence to court.

She called on the department to sign the commencement order immediately and for the courts, gardaí, Road Safety Authority and the departments of justice and transport to work together to deal with ongoing issues with the penalty point regime. “This type of issue is another example of the urgent need to consolidate all the Road Traffic Acts,” she said.

Independent TD Tommy Broughan said this “disappointing episode” was another example of the failure of departments and the courts to liaise.

“It comes after Minister for Transport Paschal Donohoe was forced to rush through amending legislation before Christmas to fix other penalty point glitches.”