The Supreme Court: where politics and the law meet 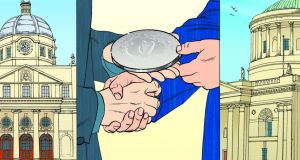 Eighteen per cent of High Court and Supreme Court judges interviewed for a 2004 study believed their political connections had an influence on their appointment. “It would be naive to think politics wouldn’t be a factor, but I think it’s less of a factor nowadays than it was,” says one judge.

It may not be a word that crops up very often when Supreme Court judges convene to decide a case. In some lawyers’ shorthand, it signifies a world from which the judiciary is obliged to stand defiantly aloof. Yet politics is a key part of the dynamic behind every Supreme Court.

The eight judges of the Supreme Court are appointed through a system that remains, despite some minor changes, fundamentally political. A number of the judges on each court invariably have previous connections to the major parties. On the bench, one of the most delicate relationships they must negotiate is with an executive that nominates them, allocates their court resources and sets their pay – all while having a very significant stake in many of the cases that come before the court.

Judges are appointed through a system that begins with the Judicial Appointments Advisory Board (JAAB), which receives applications for each vacancy and presents the government with a list of people who meet a general set of criteria on suitability. However, the Cabinet is not obliged to choose a name on the board’s list, and the body itself does not give any indication of its own order of preference.

“The JAAB is ridiculous,” says one senior counsel, whose view is widely shared. “It’s a fig leaf. It’s a filter to make sure you’re not an axe murderer or a child abuser, but that’s it.”

What happens next differs slightly depending on the government of the day. With District and Circuit Court vacancies, where there may be 60 or more applicants, lobbying of the Minister for Justice by TDs and Senators can be intense, and the circle of Ministers allowed in on deliberations is relatively wide. However for superior court appointments–the High Court and Supreme Court - the discussion is kept within a small circle. Here lobbying takes a more discreet form – a prospective judge may use an intermediary to signal an interest – if it happens at all.

The key players on the government side are the Minister for Justice, who brings the memo to government, and the attorney general. “It’s difficult to see how there could be an appointment to the superior courts without the agreement of the AG (attorney general),” says one politician who has been involved in a number of such appointments. “If he or she was lukewarm or didn’t like the appointment, it’s difficult to see how it could go through.”

Given that the JAAB is not involved where the government decides to promote a judge from a lower court – the route taken by 16 of the 18 Supreme Court judges appointed since the board was established – the government has even more room for manoeuvre for the highest court.

“With superior court appointments the role of the AG is of considerable importance because it was always understood that, ‘they’re your brothers in the courts, you understand them’.”

Latter stages
Some taoisigh show more interest in the process than others. Bertie Ahern and Brian Cowen showed less interest in Supreme Court appointments than John Bruton, for example. In the current Government, Taoiseach Enda Kenny and Tánaiste Eamon Gilmore are involved at the latter stages, but other Ministers are not told until they arrive for the weekly Cabinet meeting.

“I wouldn’t tell anyone until the last minute,” says a former minister for justice. “I used to ring up [the Taoiseach] the night before the Cabinet meeting. I would leave it very late – about 10.30pm – and ring and say, ‘by the way, I’m bringing an appointment to the Cabinet tomorrow’.”

Once a name arrives at Cabinet, the decision is already made. “The truth is that most Ministers don’t care,” says one informed source. “All they hear is a few names. There’s a brief discussion.”

The qualities governments seek in a Supreme Court judge can vary. Often the attorney will feel there is an outstanding candidate, or that a certain individual can fill a gap in expertise. Gender, background and religion have also been factors.

“Generally what is being sought is somebody with a low centre of gravity, sound judgment and a high intellectual capacity,” says another informed source. “It’s an act of faith, in some respects. And when you’re taking a decision that carries risk, you have to be cautious.”

Four people with previous involvement in appointing Supreme Court judges were asked by The Irish Times whether political affiliation was a factor. Three of them said it was. “It’s very hard to get away with saying there’s absolutely no politics in it, because we have to be truthful,” says one ex-minister for justice. “There is politics in it. But that’s partly the size of Ireland... It’s very hard to get away from it.”

While preparing a 2004 study on the backgrounds and appointments of superior court judges in Ireland, solicitor Jennifer Carroll interviewed all Supreme and High Court judges. The majority (62 per cent) said that at the time of their appointment to judicial office they had no party affiliation (some were involved as students or while at the bar).

However, 18 per cent of the judges believed their political connections had an influence on their appointment. “It would be naive to think politics wouldn’t be a factor, but I think it’s less of a factor nowadays than it was,” says one judge.

Clearly, governments take political affiliation into account when nominating a judge to the Supreme Court. It’s also something barristers consider when preparing to take a case to the court.

“Inevitably,” says a senior counsel who practices there regularly and describes the current court as “cautiously liberal”. “You’re in a case. You’re told that the court consists of five people. If you’re gauging your chances, certainly politics is one of the things you would consider. But it’s only one.”

But establishing that a party-political link influences one’s thinking on the bench is another matter. Another senior counsel plays down the importance of past involvement with a party.

“They put all that behind them. They have their ideas and their point of view, but parties can cover a multitude.”

“Contrary to expectations,” the authors write, “we find that there is no evidence to suggest that the partisan heritage of judicial appointments affects the decision-making of justices once they have been appointed to the Supreme Court.”

One barrister believes there has been some evidence of party connections informing judges’ thinking on certain issues, however. “If you’re the sort of person who gravitates towards Fianna Fáil you’re going to be more populist,” he says.

“If you’re a lawyer and gravitate towards Fine Gael, that brings with it a bundle of socioeconomic views. You tend to be more law-and-order.

Once a judge joins the Supreme Court, his or her formal links to a party come to an end. Another strictly observed convention is that Ministers or their officials never contact a Supreme Court judge about a case.

“There really isn’t any political pressure,” says retired Supreme Court judge Catherine McGuinness. “To be fair to the politicians, in my experience I have never come across that.”

One former minister for justice goes further. “Even in private discussions [among ministers], I never remember anger being expressed about the Supreme Court judges. You might hear things about the solicitor or barrister who got us here… but not really the judges. They tend to be treated with a great deal of respect.”

While most Cabinet members may pay little attention to the Supreme Court, there is one who spends a great deal of time thinking about it. For every attorney general one of the most important questions to consider when analysing a proposed piece of legislation is: Will the Supreme Court wear it?

Side of caution
Every attorney errs on the side of caution. For example, the current holder of the post, Máire Whelan, advised the government in 2012 to hold a referendum on the fiscal treaty despite Irish diplomats being convinced the treaty had been drafted in such a way as to fall short of “Crotty test”, a reference to the 1987 judgment that found significant changes to EU treaties required a referendum in order to be ratified.

Similarly, the Government has said it doubts whether abolishing upward-only rent reviews would be constitutional. In both cases Ms Whelan was anticipating what the court might say, knowing as she did the consequences of getting it wrong.

“A lot of people think the Crotty decision is wrong, but it’s political dynamite,” says a senior counsel. “Imagine if it looked like the Supreme Court was ordering you to hold a referendum. It would rock a government.”