Paddy Jackson: ‘I didn’t force myself on her. I presume she wanted it to happen’ 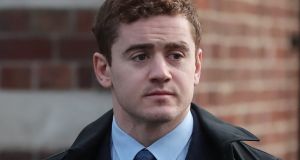 Ulster rugby player Paddy Jackson said in a statement he knew the complainant was interested in him because she touched him in a flirty way and was trying to chat to him. Photograph: PA

A woman who alleges she was raped by Ireland and Ulster Rugby player Paddy Jackson was being “forward” and was staring at him during the night, the player told police during interview.

On Friday morning the jury at Laganside Crown Court heard transcripts of Mr Jackson’s police interviews which were conducted by the PSNI Rape Crime Unit two days after the alleged attack.

Mr Jackson and his teammate Stuart Olding are accused of raping the woman in Mr Jackson’s bedroom during a house-party. Both men contend the activity was consensual.

The court heard Mr Jackson first came to the police station in the company of his solicitor and with a prepared statement.

During the first interview he refused to answer questions and responded only with “no comment”.

His solicitor read out a prepared statement to police on Mr Jackson’s behalf which said: “I strenuously deny these allegations. I am shocked and horrified that these allegations have been made against me."

Mr Jackson’s solicitor told police his client would not be making any further comment due to a lack of pre-interview disclosure by the police.

The accused did answer questions during two subsequent interviews. During those interviews he described consensual oral sex involving the woman, Mr Olding and himself but denied vaginal rape.

He also denied putting his entire hand in the woman’s vagina, calling the allegation “disgusting”.

He told police he remembered the woman being at the house-party and said she was looking at him quite a lot, which he found “kind of strange”.

He didn’t pay her much attention and was instead focused on chatting and having fun with his friends, he said. He said he had had a few drinks but wasn’t “falling around the place”.

He said he knew the woman was interested in him because she touched him a few times in a flirty way and was trying to chat to him.

Mr Jackson said he went upstairs to his bedroom and the woman followed him. He said he hoped she would follow him up due to the way she was staring at him.

She just came up behind him and they started kissing, he said.

Then she asked him what her name was and he replied he didn’t know. He said, she said something like: “Oh, you don’t know my name. Nothing’s going to happen now.”

He told police she started performing oral sex on him. Mr Olding then came to the door. Mr Jackson said he smiled and waved at Mr Olding who came in and sat at the end of the bed.

He said she then started performing oral sex on Mr Olding while Mr Jackson used his fingers “on her downstairs region”.

Mr Olding left a short time later and he and the woman “picked up where we left off”. He said no intercourse occurred with either men as there were no condoms.

Asked if he put his entire hand into the woman’s vagina, he said he would never do that and that it was disgusting.

Mr Jackson said he saw no signs of a lack of consent from the woman. “She seemed fine with it.

“I didn’t force myself on her. I presume she wanted it to happen. She didn’t have to stay, she could have left.”

The woman left shortly afterwards on her own, Mr Jackson told police.

He said he and Mr Olding discussed the incident the next day. Asked what they discussed, he told police: “It sounds stupid when you say it now but we thought it was good.”

He said he was surprised when the woman performed oral sex on him that night as they hadn’t really been talking. He said he thought “her doing it was pretty forward”.

The trial, which has now concluded until Monday, also heard a recording of one of Mr Olding’s interviews in which he said the woman invited him to take part in the sexual activity.

Mr Olding was interviewed by police on the same day as Mr Jackson. He described going upstairs and opening Mr Jackson’s bedroom door. He said he saw his teammate lying in the middle of the bed with the complainant “straddling” him as the two kissed.

He said he went to leave but “then I ended up staying”. The woman invited him to stay by holding her hand out, he said. She did not say anything.

Mr Olding went over to the bed and started kissing her, he said. Mr Jackson wasn’t doing anything while this was going on.

He told police he didn’t know who initiated the kiss. “We both went for it.”

The detective constable asked him what made him think she was consenting.

“She didn’t pull away. She kissed me back as well,” he replied.

He said she then performed oral sex on him which went on for about five minutes. While this happened, the woman asked the men if they had condoms and Mr Jackson replied they didn’t, Mr Olding said.

This was the only thing said during the encounter, he told police.

Mr Olding said he ejaculated and then left the room before going to sleep in another room. He said he was in Mr Jackson’s room for about ten or 15 minutes in total.

Asked how much drink he consumed over the night before going back to the house, Mr Olding said he had eight cans of beer, four pints of guiness, two gins, five vodkas and three shots of tequila.

Mr Jackson (26), of Oakleigh Park, Belfast has pleaded not guilty to rape and sexual assault in the early hours of June 28th, 2016 at a party in his house. Mr Olding (24), of Ardenlee Street, Belfast, denies one count of rape on the same occasion.

Blane McIlroy (26), of Royal Lodge Road, Ballydollaghan, Belfast, has pleaded not guilty one count of exposure while Rory Harrison (25), from Manse Road, Belfast, pleaded not guilty to perverting the course of justice and withholding information relating to the incident.

The jury will continue hearing Mr Olding’s interviews on Monday.

Judge Patrica Smyth told the nine men and eight women the trial is running behind schedule but she was hopeful it will finish by March 16th.