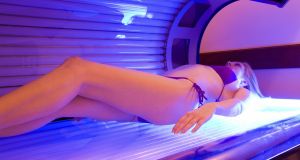 A Waterford city tanning salon which suggested that the use of sunbeds could help to kill the coronavirus has been closed down by gardaí. File photograph: Getty.

A Waterford city tanning salon which suggested that the use of sunbeds could help to kill the coronavirus has been closed down by gardaí.

Miami Tanning Waterford had kept its doors open in spite of the Government announcing on Tuesday that all non-essential businesses should cease trading to combat the spread of Covid-19. Tanning salons were not on the list of businesses that it said should continue trading.

Gardaí visited the premises on Tuesday and told the salon operators to close after receiving a number of complaints from members of the public.

Under the Health (Preservation and Protection and other Emergency Measures in the Public Interest) Act 2020, which was rushed through the Oireachtas last week, the Government has the power to mandate the closure of any business it deems to be non-essential during the current health crisis.

“For your information we stay open,” the salon posted on its Facebook page on Thursday, before adding that the Government measures were linked to the installation of “5G road lamps”.

The post said there were reasons to believe Covid-19 is “one big lie on a global scale. Many are back to work so are we”.

Miami Tanning Waterford agreed to close on Thursday afternoon after being visited by gardaí and advised to do so.

“Well salon was visited by Garda and were ordered to shutdown. Thank you everyone for your support and don’t let your freedom rights suspended by anything, government or social pressure,” the salon said in another Facebook post.

Previous posts by the salon on social media included conspiracy theories and unproven treatments for coronavirus. In January it claimed UVC (Ultraviolet-C) light can kill the virus and that sunbeds emit a type of light that is very similar to this.

When contacted by The Irish Times on Thursday, a man who said he was the owner of the salon and would only give his name as “Emil W” confirmed gardaí had visited and told him his was a non-essential business. He said he would comply with the order to close.

He denied the Facebook posts were irresponsible and said much of the information being circulated about the coronavirus is “fake news”.

The salon is one of a handful of businesses around the country which have been told to close by gardaí for remaining open in breach of the Government measures. For the last two days gardaí have been visiting businesses and pubs to ensure they are complying.

A garda spokeswoman said it would not comment on individual businesses but that it “will monitor the activity of non-essential retail outlets and proactively engage with owners/managers, where any are found not to be complying with the current public health advice.”

Meanwhile, gardaí are also continuing to respond to reports of people purposely coughing on passersby while claiming to be infected with the coronavirus.

Sources said reports of this behaviour appear to be dropping off. The force plans to bring charges against a number of people who have coughed at or spat on members of the public and emergency service workers, sources say.

The charges will likely be highly publicised in the hope of sending a message that “this sort of thing will be dealt with severely and quickly,” one said.