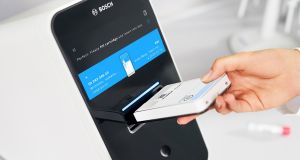 A handout photo shows an analysis cartridge put into a freestanding console that will be able deliver coronavirus test results in less than three hours, Bosch says. Photograph: Bosch/EPA

German engineering giant Bosch has developed a new coronavirus test system that it says delivers results in 2½ hours – instead of 24 hours at present.

The system, expected to roll out next month, allows a doctor take a swab from a patient’s throat, insert it into a prepared cartridge which, in turn, is fed into a free-standing console which delivers a result in less than three hours.

“It’s all automatic – stick in the swab and seal it – and it saves interminable transportation routes,” said Dr Jochen Rupp, a product manager with Bosch. “It’s very simple and, with minimum manual work, the doctor gets the result direct, day or night – negative or positive – and can react directly and quickly.”

The automated system has been welcomed in Germany where the number of confirmed virus cases has jumped nearly 5,000 in the last 24 hours to 36,508. Another 5,000 have recovered, according to authorities, while the death rate is steady at 0.5 per cent – compared to 9.5 per cent in Italy, until now Europe’s coronavirus epicentre.

German virologists have so far identified two reasons for the relatively low death rate. The first is luck: to date many German infections have been in younger, healthier people. The second is organisation and resources: Germany began testing people in January and, with a population of 82 million, is currently processing about half a million tests a week.

“We tested early and widely from the start and that’s why we discovered many mild cases,” said Dr Lothar Wieler, head of Germany’s Robert Koch Institution, responsible for disease control.

Germany’s well-funded health system has one of the highest number of intensive care beds in the world. With no room for complacency, that number is to be doubled to 56,000 with new emergency funding to be released this week.

“We have so few fatalities because we do an extremely high amount of laboratory diagnostics,” said Dr Christian Drosten, virologist at Berlin’s Charité university hospital and an adviser to the federal government.

This high level of testing doesn’t sink the mortality rate, he said, but gives a better overview of the current infection rates and geographical distribution of people with symptoms, ranging from severe to mild.

To give an added push, Germany’s federal research minister has presented plans and €150 million in funding for a new health network among the country’s coronavirus front-line university clinics. As well as exchanging patient information and producing infection models, the new network will pool greater levels of data to gain insights into how the virus affects various types of patients. This data will, in turn, be passed on to research teams.

“These university clinics are all very close to the sick but also to the research world,” said Dr Drosten, expressing hope this data exchange will expedite work on a vaccine.

While German clinics are using their spare bed capacity at present to treat patients from France and Italy, federal health minister Jens Spahn warned on Thursday that worse is to come: “This is the calm before the storm.”