Symphysiotomy case: ‘I came out a cripple in mind and body’ 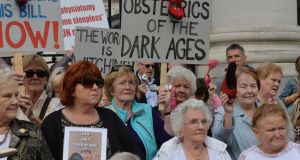 Members and supporters of Survivors of Symphysiotomy protest outside the Department of the Taoiseach about the Murphy report and the redress scheme. Photograph: Alan Betson /The Irish Times

Looking back, more than 50 years after a symphysiotomy was performed on her in a Dublin maternity hospital, Kate says she considers herself an “experiment”.

Kate (not her real name) was 24 when she went into hospital in late September 1963. “I walked into hospital but came out a cripple in mind and body.”

It was her first pregnancy and nothing was explained to her. She thought she was going to a labour ward but it was actually an operating theatre.

“He told me they were going to help me have my baby,” she says of a doctor. When she woke up from the anaesthetic, she felt “split in two”.

Her daughter was born 12 days later by forceps delivery and placed in intensive care. Kate did not get to see her for another five days. However, her mother did and described the infant to her as “black and blue”, like a “skinned rabbit”.

A symphysiotomy is an operation to enlarge the mother’s pelvis by partly cutting fibres joining the pubic bones at the front. If a baby is considered too big to pass through the pelvis, known as “disproportion”, a Caesarean section is usually carried out. A total of 578 sections were carried out in the three Dublin maternity hospitals in 1963. In the same year, 20 women underwent symphysiotomies.

As a result of the procedure, Kate says, she had difficulty bonding with her daughter, feared having another pregnancy, had just one more child and experienced life-long problems including incontinence, back pain and marital and mental health difficulties.

“When I look at the women who had this done to them, I wonder, why, why, why, when there was an easier way out for everybody, a C-section. It was my first child, I thought what they did to me was normal,” she says.

Hers was among some 150 cases initiated over symphysiotomies in Irish hospitals. Most did not proceed after the Government announced a redress scheme in July 2014. Judge Yvonne Murphy, who recommended a scheme in her report on symphysiotomy for the Department of Health, estimated its potential cost to the State at €34 million, compared with €94 million for litigation.

Yesterday’s Court of Appeals judgment rejecting Kate’s case has implications for about 30 outstanding cases. Its core finding was that, by the standards of 1963, symphysiotomy was not unjustified in the particular circumstances of Kate’s pregnancy and did not represent a deviation from a general and approved practice.

While each case will be decided on its own circumstances, legal sources believe its findings, including that a “reasonable and respectable” body of clinicians of similar expertise to the master who performed it would have approved it, may result in other cases not being pursued.

Symphysiotomy was described in the judge’s report as in sharp decline in Europe between the 1940s and 1980s and a “rare intervention in obstetric practice in Ireland”, accounting for less than 0.05 per cent of deliveries here between 1940 and 1985.

Symphysiotomy was thought by its proponents to permanently enlarge the pelvis if performed in a first pregnancy. The view was it might remove the need for a woman with “disproportion” to face repeated sections in future pregnancies.

Use of the procedure fell sharply from 1963 at both the National Maternity Hospital and Coombe and ceased in 1966.

The practice was criticised by some Irish and UK obstetricians at the time. In 1951, English obstetrician Chassar Moir called it “the murder of infants”, asking its Irish proponents: “Is it then your policy to sacrifice the firstborn baby and to use its dead or dying body as nothing more than a battering ram to stretch its mother’s pelvis?”