Supreme Court judges disagreed on one in five constitutional cases 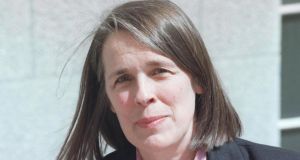 Susan Denham, Chief Justice since 2011, dissented in six cases during the five years covered by the study. Photograph: Pat Langan

Supreme Court judges disagreed among themselves on one in five constitutional cases over the past five years.

An analysis by The Irish Times of all judgments published by the State’s highest court over the past five years shows the court decided unanimously in 87 per cent of cases, with at least one judge dissenting in 10 per cent of cases. The remaining 3 per cent were appeals where the court was obliged to publish just a single judgment or did not require a formal ruling.

In cases with a constitutional component or involving a fundamental point of law, however, the proportion of unanimous decisions fell to 73 per cent, with at least one judge dissenting in 20 per cent of these cases. Constitutional appeals always involve five or seven judges of the eight-member court.

In the five-year period between July 1st, 2008, and June 30th this year, the Supreme Court overturned the decision of a lower court in 43 per cent of its published judgments. It upheld the lower court’s ruling in 51 per cent of cases, with 6 per cent of judgments not requiring a formal decision. The study does not include ex tempore judgments, or those given verbally just after a hearing, typically in less complex cases.

Of the four judges who have been on the court over the entire period of the study, Adrian Hardiman and Nial Fennelly dissented in nine Supreme Court appeals over five years. Susan Denham, Chief Justice since 2011, dissented in six cases, while her predecessor in that role, John Murray, was in dissent four times.

Growing backlog
Of the other judges on the current court, Donal O’Donnell and Liam McKechnie joined in 2010, while Frank Clarke and John MacMenamin were appointed last year. The backlog of appeals at the Supreme Court has grown considerably over recent years, with the waiting list currently at four years.

In 2012, a total of 605 cases were filed at the court – a 21 per cent increase on the previous year. The court gave judgments in about 120 cases last year, compared to 64 in the US supreme court and 85 in the supreme court in London.

The Irish Times analysis is based on 332 published judgments.

Under the Constitution, the court must make a single judgment, without revealing the opinions of individual judges, in two types of cases – when a Bill has been referred to it by the President, and when an appeal concerns an Act passed by the Oireachtas since 1937.