Man in 70s treated in hospital after alleged Sligo carjacking 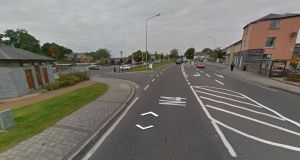 The man is believed to have been assaulted before the assailants took his car on a 55km drive to Carrick-on-Shannon (above) in Co Leitrim, pursued by gardaí. File photograph: Google Street View

A man in his 70s has been treated in hospital following an alleged carjacking in Sligo.

The man and his wife were allegedly approached by a man and a woman in Sligo town at about 7.20pm on Monday and threatened before having the keys to their Volkswagen Golf stolen.

The man is believed to have been assaulted before the assailants took his car on a 55km drive to Carrick-on-Shannon in Co Leitrim, pursued by gardaí, where both were eventually arrested following a chase on foot.

The car’s owners were taken to Sligo General Hospital for treatment and later discharged.

The suspects, both 30 years of age, were arrested following the pursuit. They were taken to Ballymote Garda station in Co Sligo and detained under Section 4 of the Criminal Justice Act.

On Tuesday, they appeared before Ballina District Court where they were charged with the unlawful taking of a vehicle.

Gardaí say their investigation is ongoing and that a file will be prepared for the Director of Public Prosecutions, with possible additional charges to follow.