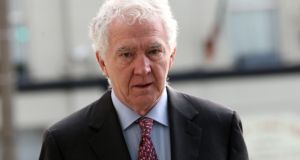 The jury in the trial of the former chairman of Anglo Irish Bank, Sean FitzPatrick, has been shown CCTV footage of a State investigator on his way to shred documents he knew were relevant to the case.

The footage showed legal adviser with the Office of the Director of Corporate Enforcement (ODCE) Kevin O’Connell carrying a tray of documents down a corridor in the ODCE offices, to a room containing the shredder.

Just as he is about to enter the room, he stops to talk with a colleague in the ODCE, Garda Gary Callinan, and seems to turn the documents over in the tray, to hide them.

Mr O’Connell told Bernard Condon SC, for Mr FitzPatrick that he was ashamed of what he had done. He panicked, he said, and did a “terrible, terrible thing”. He said he had decided to destroy the documents more than half an hour prior to actually doing so.

He could describe the three or four documents as being notes he had taken during the investigation and said they were definitely not “very important documents”. He agreed he could not tell the jury precisely what was in them.

Mr O’Connell said he was aware of the right of a defendant to get documents relevant to the case against him and that it was an “absolute disgrace” for a State investigator to do what he had done.

He said he returned to his office on Friday May 1st, 2015, after having been examined for two days, and cross-examined for four, as part of an earlier trial of Mr FitzPatrick for the same offences. It had only been his second time in a witness box and had been very difficult. That trial did not reach a conclusion.

He said he found relevant documents in his office that should have been disclosed, and panicked. He told the Director of Corporate Enforcement, Ian Drennan, what had happened, and the Office of the Director of Public Prosecutions was informed. He knew he would now have to return to the witness box and was “terrified” at that prospect.

When he then went back to his office he found more documents in the tray where he had just found the earlier ones, and decided to destroy them. “I panicked on top of panic” and made a “calamitous mistake”. His decision to destroy the documents was wrong, shameful, and unethical.

He said he spoke to Mr Drennan, and Henry Mathews of the DPP, over the course of the weekend, and did not tell them about his destroying documents. However on the Monday he told Mr Drennan.

Mr FitzPatrick, of Whitshed Road, Greystones, Co Wicklow, has pleaded not guilty to 27 offences under the 1990 Companies Act.

These include 22 charges of making a misleading, false or deceptive statement to auditors and five charges of furnishing false information in the years 2002-2007.

The prosecution alleges the loans were “artificially reduced” for a period of two weeks around the bank’s financial year ends by loans from Irish Nationwide Building Society.

The jury heard that subsequent to Mr O’Connell having shredded the documents, a report about the adjourned 2015 trial was prepared by Det Inspector Raymond Kavanagh and sent to Garda management. A note attached to the report said the Garda seconded to the ODCE had no role in the drafting of witness statements relevant to Mr FitzPatrick’s case, which had been the subject of criticism by the court, and had no role in the destruction of disclosable documents “by the ODCE”.