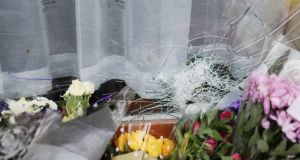 Flowers and a damaged window at the home of George Nkencho in Clonee, west Dublin, where he was shot multiple times by gardaí. Photograph: Brian Lawless/PA Wire

A non-lethal Garda tactic for disarming knife-wielding suspects was not available to Dublin officers on the day George Nkencho was shot dead.

Mr Nkencho (27) was fatally shot by the Garda Armed Support Unit (ASU) in Clonee last week after assaulting a shopkeeper and threatening gardaí with a knife.

The Garda said officers engaged in a graduated response to the threat, first issuing verbal commands before using pepper spray and Tasers to subdue Mr Nkencho.

When these tactics did not work, an ASU officer, believing Mr Nkencho was about to take hostages, fired five shots from his official firearm, gardaí said, fatally wounding the man.

According to Garda sources, another option exists to deal with knife-wielding suspects which can be employed before lethal force is used.

However, only the Garda Public Order Unit is equipped and trained in the tactic. A full-time public order unit has been rostered on duty in Dublin for much of the Covid-19 pandemic and over the Christmas period. But no unit was on duty in the Dublin Metropolitan Region on the day of the shooting.

Other officers standing behind them deploy Mark 9 pepper spray canisters – a much larger versions of the canisters carried by ordinary members – and spray the suspect over the top of the shields.

The suspect is then pinned to the ground by the shields before being disarmed. The suspect “never gets more than one swing in and never any major injuries”, a source said.

The tactics can be altered if a suspect enters a house or goes upstairs. Garda training in the tactic, which can only be used on suspects with bladed or blunt weapons, is based on that used by Police Scotland.

Sources said ASU members dealing with a knife-wielding suspect will sometimes hold a perimeter and try to de-escalate a situation while waiting on the Public Order Unit to arrive and employ Outdoor VDP tactics.

However, it is not clear if such an option would have been appropriate in Clonee last week, even if the Public Order Unit had been available.

Mr Nkencho, who suffered from mental health issues, was shot in his front garden after knocking on the front door. Gardaí with direct knowledge of the incident said officers did not know he lived in the house and feared he was going to take the occupants hostage if they did not act.

Any review of Mr Nkencho’s shooting is likely to examine if VDP tactics should have been available and if they would have been appropriate, sources said.

Public Order Units are typically deployed in three vans, which are known as “serials”, with seven gardaí and one sergeant in each van.

In Dublin one van covers the east region, one covers the west and one the south central area.

A Garda spokesman confirmed details of the VDP tactic and said Public Order Units are not rostered on routine patrols.

The Garda said it would not comment on the specifics of Mr Nkencho’s shooting. An investigation by the Garda Ombudsman Commission is ongoing.