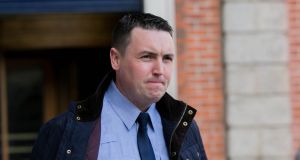 The senior Garda officer in Donegal told the Charleton tribunal she wanted gardaí to be seen to be acting in a “clear and transparent” manner in investigating allegations made against whistleblower Garda Keith Harrison.

Chief Supt Terry McGinn had worked as an official liaison to the Morris tribunal looking at allegations against certain Donegal gardaí. She said that following that inquiry, confidence in policing was very low and she was tasked with restoring trust.

In the current module, the tribunal is looking at contacts between gardaí­ and the HSE/Tusla relating to Garda Harrison.

The witness said that in October 2013, she had “a confidence issue” about Garda Harrison’s ability to carry out his functions as a garda. Reports from the sister and mother of Garda Harrison’s partner Marissa Simms led to a statement being taken on October 6th, 2013 from Ms Simms alleging domestic abuse.

Chief Supt McGinn said she appointed Insp Goretti Sheridan to look into the matter at the end of September 2013, following a report that Ms Simms had left the family home with her children late at night.

“I think it’s most unusual that a woman would be thrown out of her house in the middle of the night,” the senior garda said.

The chief superintendent said that she was not on duty when Ms Simms made a statement to Insp Sheridan.

She said she had never conveyed to Insp Sheridan that she had to get a statement, and she had never said that “no garda in this division is going to treat a woman that way”.

On October 8th, a Garda conference was held to consider what to do . As a result, a referral was made to Gsoc, and because children were alleged to have witnessed an incident, Tusla was also notified.

The witness said that because Martin McDermott, a brother of Ms Simms, had been charged with manslaughter following the death of a garda, she wanted to ensure the appearance of independence, and this was another reason to want Gsoc to carry out any investigation.

The chief superintendent said it was not the case that she wanted to “surreptitiously” refer Garda Harrison to Gsoc.