Drink-driving arrests in February up 22.8% on last year 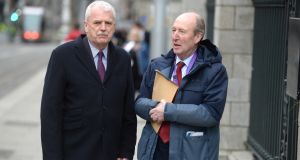 February saw a more than 20 per cent increase in the number of people caught for drink-driving compared to the same month last year.

There were 646 arrests in February 2019 compared to 526 in February 2018, an increase of 120 (22.81 per cent), according to the latest Garda statistics. All those caught will be banned under legislation introduced in October.

Figures for drink-driving arrests in January were up 16 per cent compared to the same period in 2018.

It is understood the increasing numbers of arrests reflect the wider use of Garda checkpoints in recent months. Gardaí operated 11,173 Garda checkpoints around the country in the first two months of this year.

Mr McGrath said there was an “agenda” to damage Government among gardaí and that Garda Commissioner Drew Harris should “de-politicise” the force.

Mr McGrath later apologised and withdrew the comments following criticism and calls for his resignation.

“I am aware that my comments regarding the gardaí and drink-driving have caused hurt to families and victims who continue to suffer the consequences of drink-driving,” the junior Minister said.

Separately it has emerged that one-third of all court appeals against driver disqualification are successful and result in the applicant getting their licence back.

In October last year legislation was introduced by Minister for Transport Shane Ross banning drink-drivers for three months in all cases. Previously some drink-drivers escaped with penalty points rather than disqualification.

According to figures released to Independent TD Tommy Broughan in response to a parliamentary question, over 10,000 drivers were banned from driving for various reasons in 2018, including drink-driving and accumulating penalty points.

Of those, 2,830 appealed the decision, of which 989 were successful. In 531 of the successful appeals the ban was completely overturned, while it was reduced to a fine in 458 cases.

About one in every three drivers banned from the road appeal the decision, a number that has been increasing in recent years. In 2016, 2,059 people launched an appeal compared to 2,830 last year.