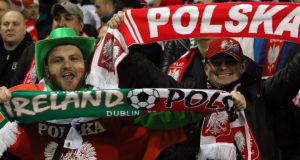 The Euro 2016 qualifying football match between Ireland and Poland at Aviva Stadium in Dublin on Sunday, which ended 1-1. Photograph: Paul Faith/AFP/Getty Images

A Polish football association official was arrested for ticket-touting outside the Aviva Stadium in Dublin before the Euro 2016 qualifier against Ireland on Sunday, a court has heard.

Kazimierz Gren (52) of the Polish football association (PZPN), who came here on an official trip for the match, spent Sunday night in a cell after being arrested at Lansdowne Road for unlawfully selling match tickets.

He was spared a criminal record when Judge Michael Walsh in Dublin District Court found that, while he had been ticket-touting, there were “extenuating circumstances”. The judge was told Mr Gren had been trying to help Polish people living in Ireland to get to the game.

The PZPN official was charged under Section 3 of the Casual Trading Act for failing to produce a licence allowing him to sell the tickets in public places.

Defence solicitor Matthew de Courcy confirmed Mr Gren, from Popieluszki, Rzeszów, in south-east Poland, who had the proceedings translated, was pleading guilty to the charge.

Mr de Courcy explained that while the situation seemed “shady”, Mr Gren worked for a regional office of the Polish football association and had come to Dublin on an expenses-paid trip for the match.

He had brought 12 tickets for relatives of people in his district in Poland who live in Ireland.

Nina Blasik (30), from Hanasterzec, Sesku, Poland, pleaded guilty to the same charge. Mr de Courcy explained she was a friend of Mr Gren and was there to facilitate meeting the people who were waiting for their tickets.

Judge Walsh said the match was a sell-out but noted from the defence lawyer that the block of 12 seats on Mr Gren’s tickets went unused. Mr Gren had to learn the match result from gardaí after he was held overnight pending his court appearance, the judge was also told.

Mr de Courcy said his clients had a flight booked to return home on Monday. He asked the judge to note it was an unfortunate set of circumstances and Mr Gren and Ms Blasik had no previous convictions.

There was the possibility of having a technical argument in relation to the charge, the solicitor told the court. He said Mr Gren and Ms Blasik had been “nearly home and dry” but he asked the judge to note “they are holding their hands up; pleading guilty”.

The tickets had been sourced in Poland and Mr Gren had been trying to accommodate some Polish people living in Dublin, the judge was told.

Judge Walsh said he was marking the case as facts proved but in view of the extenuating circumstances he was striking it out.