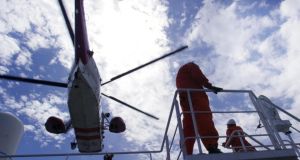 The Coast Guard is monitoring the vessel from the air and coast. Photograph: Bryan O’Brien

The captain of the tall ship Astrid, which sank off the west Cork coast last week, yesterday expressed his dismay at the news that thieves have stolen the ship’s compass, bell and binnacle which holds navigational equipment in a night raid on the vessel.

Pieter De Kam said he was angry and saddened to learn that somebody had gone aboard the wreck of the Astrid at Quay rock on Prince’s Bed off Ballymacus Point near Kinsale to plunder parts of the 95-year-old brig.

“I am eternally grateful to the Irish people for saving everyone on board the Astrid, but I am not grateful to whatever Irish people have gone aboard my ship and stolen my compass, my bell and my binnacle – it’s very terrible,” he told The Irish Times.

Mr De Kam, who has returned to the Netherlands, said he was surprised at the news that items had been stolen from the ship as he understood there was an exclusion zone around the vessel which should have prevented anyone accessing the ship.

Cover of darkness
Declan Geoghegan of the Irish Coast Guard, which is monitoring the vessel from the coast and from the air, said it appeared that the thieves had managed to gain access to the ship on Friday night under the cover of darkness when the tide was low.

“At low tide the ship is fully visible above water – we believe somebody must have gone out there in a boat or a Rib because they would have needed a boat to take off the binnacle, the compass and the bell because they are all heavy items.

“They would also have probably needed a generator and some cutting equipment, and there was probably three or four hours of hard work in getting them off.

“It was very fortunate that nobody was lost when the ship sank after hitting the Sovereigns but she was substantially intact still – it’s just very sad to think now that somebody would do something like this and steal these items from such a fine sailing ship.”

Salvage operation
Meanwhile, negotiations are continuing between an Irish salvage company and the marine surveyors appointed by the Astrid’s insurers with a view to mounting a salvage operation. It is hoped that a plan for a wreck removal will be agreed within a few days.

Rapist returned to prison after pleading guilty to burglary charges