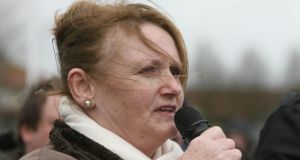 The parole board in Northern Ireland is to release veteran republican and Old Bailey bomber Marian Price from prison. Photograph: Niall Carson/PA Wire

Old Bailey bomber Marian Price was today released from hospital custody into the care of her family and friends. The decision was taken by the North’s Independent Parole Commissioners and comes following a lengthy campaign that she should be released on humanitarian grounds.

The 58-year-old dissident republican supporter, with her late sister Dolours who died in January this year, was part of an IRA unit that bombed the Old Bailey court in central London in March 1973 injuring more than 200 people. One man caught up in the blast died from a heart attack.

In May 2011 the former Northern Secretary Owen Paterson revoked the licence under which she was released in 1980 because of her alleged involvement in dissident republican activity, and sent her back to prison.

In prison she faced prosecution in relation to an alleged offence of providing property for the purposes of terrorism. She was accused of purchasing a mobile phone for a dissident paramilitary who used it to make a claim to the media that the Real IRA killed the soldiers Patrick Azimkar and Mark Quinsey at Massereene in Antrim in March 2009.

She also faced prosecution over her appearance a dissident republican rally in Derry on Easter Monday 2011 when she held up a paper from which a masked dissident read a statement warning of further attacks on PSNI officers. This was shortly after the dissident murder of PSNI Constable Ronan Kerr.

The Northern Ireland Office in a statement on behalf of the current Northern Secretary Theresa Villiers said the decision by the commissioners reflected the “fact that my predecessor’s decision to revoke Mrs McGlinchey’s life licence was justified in May 2011” although she added that she could not comment further as such decisions were not made public.

Since her return to prison Ms Price has suffered severe illness. In February last year, after independent medical recommendation, she was transferred from Maghaberry Prison near Lisburn to Hydebank Prison. In June last year she was moved to a Belfast hospital, under guard and still in custody.

In January this year she was allowed temporary release to attend the wake of her sister Dolours in Andersonstown in west Belfast. She did not attend the funeral. Both sisters were deeply antagonistic to the peace process, believing it a “sell-out”, and to Sinn Féin leaders such as Gerry Adams.

Her release follows on a campaign by various politicians, church figures and human rights activists. Welcoming the decision Tánaiste Eamon Gilmore said her “detention and declining health have led to concerns across the political spectrum in the Oireachtas and I know that this decision will be widely welcomed on humanitarian grounds”.

Her release has also raised the issue of the continuing detention of dissident republican sympathiser Martin Corey, who also had his previous release on licence revoked. Sinn Féin president Gerry Adams said Ms Price had been very ill for most of her time under detention.

“She posed no threat and her continued detention undermined the justice system and the political process. The logic of today’s release is that Martin Corey should also be freed,” he said.

SDLP Assembly member Pat Ramsey said, “This was never a case about politics. It had human rights at its centre and this and other cases, regardless of political viewpoint should be seen as a human rights issue. This will ensure that our society progresses to having a true human rights culture.”

The DUP’s Assembly justice committee chairman Paul Givan said the parole commissioners should explain their decision. He added, “Those who have rallied to Marian Price’s case should understand that their pandering to dissident republicans sends a mixed message to people across the province. They should have no truck with those who condone the work of terrorists. A clear signal must be sent to anyone who harbours or supports terrorism that they will feel the full weight of the law.”