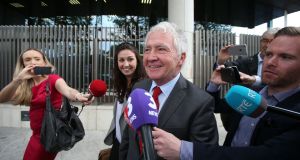 The Office of the Director of Corporate Enforcement (ODCE) paid more than €300,000 for expert testimony for the Seán FitzPatrick trial, much of which was not allowed to be put to the jury.

The ODCE, which conducted the inquiry into whether Mr FitzPatrick had misled Anglo Irish Bank’s auditors regarding his loans from the bank, commissioned expert reports on audits and on forensic accounting from Mazars, London, as part of its preparation for the trial.

However, in a ruling in March, not reported on before, Judge John Aylmer said that the audit expert, Nigel Grummitt, could not give testimony on the grounds that his proposed evidence was “irrelevant”.

Mr Grummitt was to assert that there was an obligation on Mr FitzPatrick to make certain disclosures about his loans under the “true and fair” accounting rule, and that this “overrode” the letter of the law.

However, following argument from Mr FitzPatrick’s legal team, the judge ruled that this was a “highly controversial” proposition and that there was nothing about the Irish law that suggested it should be interpreted in this way.

He said the proposed expert evidence would be “entirely unhelpful, unnecessary, misleading and singularly confusing to the jury” in what was already a complex case.

The judge ruled that expert forensic accountant David Dearman could give evidence to the jury, but only after his report was revised so that it incorporated “significant concessions” made by the prosecution after the defence challenged some parts of it.

On Wednesday the judge directed the jury to acquit Mr FitzPatrick on all charges. He did so because of the flawed nature of the “biased” investigation conducted by the ODCE. Mr FitzPatrick was on legal aid and the bringing of charges against him is likely to have cost the State millions of euro.

During the trial, ODCE solicitor Kevin O’Connell, who led the investigation, was questioned by Shelley Horan BL, for the defence, about his engagement of expert witnesses. In evidence given in the absence of the jury, Mr O’Connell accepted that he had never engaged an expert witness before.

It is understood the cost of the expert witnesses was much higher than was envisaged, in part because of the disclosure requests made against Mazars by Mr FitzPatrick’s defence team.

A spokesman for the ODCE said he had no comment to make. A report on how the FitzPatrick investigation was conducted is being prepared for the Minister for Enterprise, Mary Mitchell O’Connor.