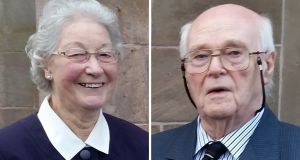 Marjorie Cawdery (left) and Michael Cawdery, both 83, who were found murdered in their home in Portadown, Co Armagh. Photograph: PA 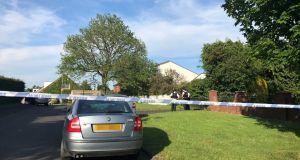 Police at the scene after two pensioners were found murdered in their home in Co Armagh. Photograph: Deborah McAleese/PA Wire

The family of an elderly couple murdered in Co Armagh have spoken of their “awful and incomprehensible” deaths at their home in Portadown.

Michael and Lilian ‘Majorie’ Cawdery were both 83. It is believed they were stabbed to death.

A murder investigation is under way after the couple was found dead at their home in the Upper Ramone Park area of Portadown just before 3.40pm on Friday afternoon by relatives.

A statement from the Cawdery family on Saturday said: “The awful and incomprehensible events of Friday 26th May have deprived our family of two wonderful people Michael and Marjorie who were our father, mother, brother, sister and grandparents.

“We thank the Police for their prompt response and professional actions.

“We also thank everyone who has expressed sympathy in whatever way and offered help.

“Finally, we ask for respect and privacy in the coming days as the family try to come to terms with their loss.”

A 40-year-old man, thought to have been detained under the Mental Health Act prior to the killings, was arrested in the Springfields area of Portadown shortly after the deaths and remains in police custody.

It is understood he had been at a mental health facility at Craigavon Area Hospital. It is not clear if he absconded from the unit or left there unchallenged.

It is thought the Southern Health and Social Care Trust has launched an investigation into the incident.

On Friday night a spokeswoman for the Trust declined to comment on the basis that a PSNI investigation is under way.

It is understood police are investigating if the couple were killed in a possible “botched burglary”.

The vehicle was then found in the Edenderry Gardens area at around 5pm.

“We need to know the movements of this car from the time it left Upper Ramone Park until it was recovered in Edenderry Gardens,” he said.

“I would appeal to anyone who may have seen anything suspicious in and around the Edenderry or Springfields areas yesterday, to please let us know.

“Detectives remain in the area and we will have extra patrols in the Portadown area. Anyone with information should contact police on the non-emergency number 101.

“Or, if you would prefer to provide information without giving your details, you can contact the independent charity Crimestoppers and speak to them anonymously on 0800 555 111.”

Politicians from across the political spectrum have spoken of the sadness and shock in the local community at what has been described as a “heinous crime”.

SDLP councillor Declan McAlinden said: “The entire community is just in shock that someone could murder an elderly couple in their own home like this.

The DUP’s outgoing Upper Bann MP David Simpson said his thoughts and prayers are with the family.

Doug Beattie MLA, the Ulster Unionist Westminster candidate for Upper Bann, told the Irish Times the man had been taken to a mental health facility at Craigavon Area Hospital and that after leaving there he went on to kill the couple.

“I was on the scene shortly after the incident and the local community was visibly shocked,” he added.