Nothing sinister in many ‘disappearing’ asylum cases 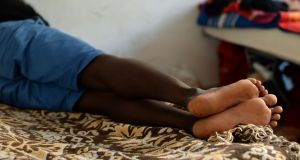 One Garda officers said: “These people are effectively travelling around looking for somewhere to make their life.” Photograph: Frank Miller

News that thousands of failed asylum seekers who seemingly disappeared without trace begs one question: where have they gone? The uncomfortable truth is that the Irish authorities simply do not know.

However, the Republic is not alone in that regard. In the UK, reactive and right-wing sections of the media keep the British public updated on the number of failed asylum seekers who have gone missing.

They are often referred to as having “absconded”, the same terminology used for convicted criminals who have left an open prison.

However, there is no evidence in Ireland that those foreign nationals missing having “absconded” in any sinister way. It is a worry so many can simply vanish, but it is perhaps not surprising; especially when the onus in the first instance is on the asylum seeker to leave the State of their own volition once their application has been rejected. Failure to do so can then result in forced deportation.

Many of those making asylum claims having travelled after being displaced by war, extreme violence or persecution. Many others simply want better lives for themselves and their children. If their asylum claim fails in their country of choice, it is hardly surprising they would depart for another jurisdiction before being forcibly removed by the Garda. If they decided not to wait to be deported or even to be assisted by the Irish State in leaving voluntarily, technically speaking they are unaccounted for.

Appearing before the Public Accounts Committee last year, acting secretary general of the Department of Justice Noel Waters set out clearly that, as people can simply leave long before any forced deportation arises, it was impossible to keep track of them.

“It turned out that the actual live caseload was nearer to 6,000, so the other people had disappeared somewhere into the system,” he said. The asylum seekers and their legal representatives were contacted as part of the audit, with many living outside the direct provision system.

“More than likely, as the Garda would tell us, they would have left the country and probably would have gone back to the United Kingdom, ” Mr Waters said.

He added the common travel area between the UK and Republic, and the lack of any physical border to clear travelling from the Republic to the North, effectively facilitated failed asylum seekers departing for the UK without ever registering or being recorded as having departed. He said the favoured route for asylum seekers was to make their way to the North, travel by ferry to Scotland and from there make their way south into England.

Mr Waters said it was impossible to collect figures for those leaving voluntarily.

Garda officers said the figures of unaccounted person was not surprising as, as one officer put it: “These people are effectively travelling around looking for somewhere to make their life.”