North murder cases could be reopened after court ruling 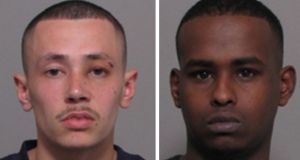 The London Supreme Court said on Thursday, ruling on the case of Ameen Jogee and Mohammed Hirsi (pictured), it was not right that someone should be guilty merely because they foresaw that a co-accused might commit a crime Photograph: Leicestershire Police/PA Wire

A London Supreme Court ruling on the issue of joint enterprise could lead to the reopening of several Northern Ireland cases including the murders of a PSNI officer, two British army corporals and a 15-year-old schoolboy, according to Northern Ireland solicitors.

Under this law defendants can be convicted of murder – even if they had not directly carried out the fatal attack – provided they foresaw that violence could be perpetrated by their associates.

Patrick Madden of the Belfast legal firm of Madden and Finucane said on Thursday night that one of his clients, Michael Timmons, who was convicted in relation to the IRA murders of the two British army corporals, David Howes and Derek Woods in west Belfast in 1988, could now be appealing that sentence.

Another leading Belfast solicitor Kevin Winter said that his client Brendan McConville may now appeal his conviction in relation to the Continuity IRA murder of PSNI Constable Stephen Carroll in Craigavon, Co Armagh in 2009. He was the first police officer to be murdered by paramilitaries since the formation of the PSNI in November 2001.

Mr Winter said he would also be considering an appeal on behalf of one of his clients in respect of the loyalist sectarian murder of 15-year-old north Belfast Catholic schoolboy Thomas Devlin in 2005. That case also involved joint enterprise law.

Both Mr Madden and Mr Winter said there could be dozens of appeals following Thursday’s Supreme Court ruling that for more than 30 years trial judges have been misinterpreting a law relating to joint criminal enterprise.

“We have a substantial number of clients who have passed through the criminal courts over the last 30 years, having mistakenly served very lengthy sentences, who will now look to appeal their convictions,” he added.

“This correction has been a long time coming and is a sea change in the law. There are still many defendants currently before the courts who can now hope to have their cases ending with a much fairer and proportionate outcome,” he added.

Mr Winter said: “This ruling could lead to the re-opening of many cases going back 30 years.”

Another leading defence solicitor Joe Rice said the ruling would be carefully studied by lawyers in the North.

“It may also well be that people who have served sentences may wish to consider their right to bring cases for compensation as a result of this,” he said.

The London Supreme Court said on Thursday it was not right that someone should be guilty merely because they foresaw that a co-accused might commit a crime. It found that jurors should view “foresight” only as evidence to be taken into account, not as proof.

The five Supreme Court judges had analysed the issue at a hearing in London when considering an appeal by a man who was convicted of murder after egging on a friend to stab a solicitor.

Ameen Jogee and Mohammed Hirsi, both in their 20s, were given life sentences at Nottingham Crown Court in March 2012 after being convicted of Paul Fyfe’s murder. Jurors heard that Hirsi stabbed Mr Fyfe while being encouraged by Jogee.

The Supreme Court allowed Jogee’s appeal against conviction. The judges said he would stay in prison pending a decision on whether he should be re-tried for murder or re-sentenced on the basis that he was guilty of manslaughter.

1 Could Ireland put towns under lockdown if coronavirus arrived?
2 Dublin man may have been stabbed to death by woman in parking space row
3 Varadkar declines to negotiate with Fianna Fáil on forming government
4 IRFU seek meeting over call to postpone Ireland-Italy match
5 Ex-paratrooper and IRA man allegedly involved in murder of three soldiers
Real news has value SUBSCRIBE