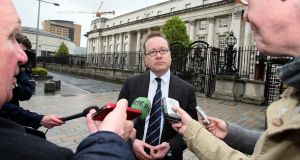 Northern Ireland’s top law officer has taken an unprecedented step towards having a failed legal challenge to the Brexit process referred directly to the Supreme Court.

Attorney General John Larkin QC said on Tuesday he has issued a notice that matters of devolution in the case taken by a cross-party group of MLAs are worthy of further judicial consideration.

His position could result in the Stormont politicians’ legal action being split from separate proceedings brought by the father of a loyalist paramilitary murder victim.

Last month a High Court judge in Belfast dismissed bids by Raymond McCord and the MLAs to halt the United Kingdom’s planned departure from the European Union.

Mr Justice Maguire rejected claims that the British government cannot use royal prerogative powers to begin EU withdrawal without an Act of Parliament. But last week the High Court in London held that only Parliament can trigger Brexit.

With the government set to challenge that ruling at the Supreme Court, lawyers in the Northern Ireland cases returned to court today to decide on their own appeal routes.

It was anticipated that requests would be made for both to “leapfrog” the Court of Appeal and go directly to London. However, Mr Larkin disclosed his intention to seek to refer only one of the two cases, using powers under the Northern Ireland Act 1998 dealing with devolution issues.

He confirmed his plan was only to make a reference in the judicial review brought by politicians including Alliance MLA David Ford, SDLP leader Colum Eastwood, Sinn Féin Assemblyman John O’Dowd and Steven Agnew of the Green Party.

“Without any disrespect to those advising Mr McCord, it’s in that litigation the points are best pleaded,” the Attorney General said. “I understand this would be the very first reference of its kind in any of the jurisdictions in the United Kingdom. ”

Although no final outcome was reached, Mr Justice Maguire indicated that if the notice was properly served he cannot prevent the legal step. Counsel for the government claimed, however, that any move to split the two cases could ultimately prove to be a “treacherous shortcut”.

Even if Mr McCord’s case is not included in any reference, he will still have the right to seek the overturn the original verdict at the Northern Ireland Court of Appeal.

The victims campaigner’s barrister expressed concern at the Attorney General’s proposed legal mechanism. “It may reflect the fact that he does represent the Government in some form or other,” Ronan Lavery QC said. “We say the case made by Mr McCord goes much further and is potentially much more significant and harmful.”

Mr Justice Maguire, whose judgment dealt only with issues specific to Northern Ireland, adjourned the hearing for further written submissions.

British prime minister Theresa May is set to trigger Article 50 of the Lisbon Treaty, the formal process for confirming the UK is to leave, by the end of March 2017. Even though the June 23 referendum backed Brexit, a 56 per cebt majority of voters in Northern Ireland wanted to remain. During the original three day hearing in Belfast it was contended that the move is illegal without first securing Parliamentary authorisation. But the judge identified no limits to the use of prerogative power for announcing intentions to quit the EU.

Mr McCord, whose son Raymond Jr was beaten to death by the UVF in 1997, claimed they have a legal right to resist being forced out. His lawyers argued that the 1998 Belfast Agreement has given the Northern Irish public sole sovereignty to decide on their future.

They also predicted Brexit would have a “catastrophic effect” on the peace process, causing constitutional upheaval amid renewed calls for a united Ireland.