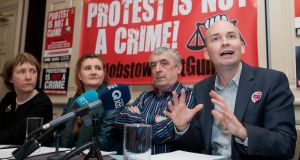 Protesters accused of falsely imprisoning Labour politician Joan Burton in Jobstown, Dublin, in 2014 claim they have received gestures of support from French presidential candidate Jean-Luc Mélenchon and academic Noam Chomsky ahead of their upcoming trial.

Seven water charges protesters are to stand trial in April accused of false imprisonment over the alleged blocking of the then tánaiste’s car for two hours on November 15th, 2014.

Speaking at a press conference on Monday to launch the #JobstownNotGuilty campaign, Anti-Austerity Alliance TD Paul Murphy, who is one of the accused, said some high-profile supporters of the group may even attend the trial’s opening hearing in the Circuit Criminal Court on April 24th.

At the press conference, Mr Murphy’s colleagues read out a note of support they said was given to them by soccer pundit Eamon Dunphy.

They apologised for the former Ireland international’s late withdrawal from the event, due to a recent medical procedure.

“It’s the criminalising of political protest that’s particularly bad in the case of a kid, 15-years-old at the time,” the note read, in reference to a 17-year-old who was recently convicted of false imprisonment in the Children’s Court for his part in the protest.

“It looks like political policing and it’s alien to democracy anywhere, particularly in Ireland.

“There are lots of people you’d think of giving a criminal record to before you go to a kid like that - bankers, for example.”

The conference followed a round-table discussion in which members of the so-called “Jobstown Seven” were given advice by protesters from other campaigns, such as the “Rossport Five”, who opposed the construction of a gas pipeline in Co Mayo, and participants in the Greyhound strike in 2014.

The event also highlighted a solidarity rally at Liberty Hall in Dublin on April 1st, which will be attended by Birmingham Six prisoner Paddy Hill.

During the conference, Mr Murphy appeared to draw similarities between the “Jobstown Seven” and the experiences of the Birmingham Six, as well as the Guildford Four.

Asked what will be the grounds of defence in the trial, Mr Murphy referenced the freedom of assembly guaranteed by the European Convention on Human Rights.

“We think what is threatened here is a very, very serious miscarriage of justice,” he added.

Speaking at the meeting, former MEP Patricia McKenna described the false imprisonment charges as “a new low” and a “gross abuse of power” on behalf of the political establishment.