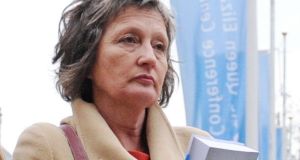 Geraldine Finucane, who witnessed the shooting, had appealed against a 2015 judicial ruling that the decision taken iby then prime minister David Cameron in 2011 was lawful. Photograph: Stefan Rousseau/PA Wire

The British government was justified in denying a public inquiry into the killing of Belfast solicitor Pat Finucane, the Court of Appeal in Belfast ruled on Tuesday.

Senior judges rejected a bid by the murdered lawyer’s widow to overturn a finding that former UK prime minister David Cameron acted lawfully in refusing to order such a tribunal.

They agreed that Geraldine Finucane had received a clear and unambiguous promise that any recommended inquiry would be held. But they concluded that other issues, including political developments in Northern Ireland and the potential cost of a lengthy process, were enough to frustrate her legitimate expectation.

Dismissing the appeal, Lord Justice Gillen said: “Not only was this reasoning transparent, but, based on all the range of public interest factors under consideration, it was a lawful decision by the government, within its discretion, that it should not be held bound to maintain a policy of instituting a public inquiry in this instance.”

The three-judge panel also reversed an earlier declaration that the State has not fully met its human rights obligation to investigate the shooting.

Mr Finucane was gunned down by loyalist paramilitaries at his north Belfast home in February, 1989. His family have campaigned for a full examination of alleged security force collusion with the killers.

In 2011, Mr Cameron decided against ordering a public inquiry, and instead commissioned QC Sir Desmond de Silva to review all documents relating to the case and produce a narrative of what happened.

Sir Desmond’s report confirmed agents of the state were involved in the murder and that it should have been prevented. He also linked a military intelligence unit, the Force Research Unit, because one of its agents was involved in selecting targets.

However, the report concluded there had been no overarching state conspiracy.

The Finucane family rejected the findings as a whitewash and accused the government of unlawfully reneging on previous commitments.

Pledges to set up such a tribunal, based on the recommendation of retired Canadian judge Peter Cory, were made by a former Labour government in 2004 and reaffirmed in the following years, it was contended.

In 2015, a judge backed the government’s case that shifting public interest issues were enough to override Ms Finucane’s expectation. Challenging that verdict, her lawyers argued that a full public inquiry was necessary to examine an alleged abuse of power for which no one in authority has been brought to account.

The Court of Appeal heard the murdered solicitor was the victim of an army-run death squad normally associated with Latin American dictatorships. Counsel for Mrs Finucane claimed her husband’s killing was due to covert, state-sponsored terrorism and represents a “horror story” for the British government. Only Ken Barrett, the loyalist gunman and “UDA puppet” convicted of the killing, has been held responsible, it was contended.

Correspondence from one of Mr Cameron’s closest advisors was set out in which the murder was described as far worse than anything alleged in Iraq or Afghanistan. In an email to another senior Downing Street official, cabinet secretary Sir Jeremy Heywood also said he could not think of an argument to defend not holding a public inquiry, the court heard.

It was argued that a clear and unambiguous promise was previously made to hold such a public probe – creating a legitimate expectation on the part of the murdered lawyer’s family.

But the appeal judges rejected the Finucane family’s case, including claims that the government staged an elaborate sham process before announcing its predetermined decision. “To suggest that the secretary of state, the prime minister, and for that reason the learned trial judge, have failed to identify cost as a factor that loomed large in the final decision to deny a pubic inquiry is self-evidently without foundation,” Lord Justice Gillen said. “It is clear that in coming to a decision about the public interest, developments in Northern Ireland, and indeed elsewhere, played a part in the argument.”

He concluded the full range of factors were considered thoroughly before a clear decision was reached at a ministerial cabinet meeting that the objective in finding the truth would be better served by a process other than a potentially lengthy, costly and procedurally difficult public inquiry.

Rejecting the contention that the decision was unfair or an abuse of power, he added: “We are satisfied there is neither the necessary strength nor quality in any of the evidence produced to found an allegation that this outcome was pre-determined or that the process followed amounted to a sham.”