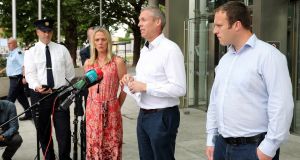 Garda Colm Donohue, brother of late Garda Adrian Donohoe, speaks to the media outside the Criminal Courts of Justice in Dublin after Aaron Brady convicted of his brother’s murder at Lordship Credit Union in January 2013. Photograph: Crispin Rodwell

Caroline Donohoe, the widow of Det Garda Adrian Donohoe, thanked the jury in the trial of Aaron Brady after it convicted him of her husband’s capital murder and a related robbery in Co Louth 7½ years ago.

The dead man’s brother, Garda Colm Donohoe, said other gang members were with Brady when his brother was shot dead in the service of the State, adding the investigation into those men would be continuing.

Ms Donohoe, who had two young children at the time her husband, their father, was shot dead during a robbery at Lordship Credit Union on the Cooley Peninsula in January 2013, said she was very thankful Brady had been found guilty.

“I would like to most sincerely thank the jury for sticking with this trial for so long, and to my Garda colleagues and to the prosecution team,” she said, adding she was issuing her thanks on behalf of her son and and daughter, Niall and Amy.

Brady was on Wednesday found guilty of the capital murder of Det Garda Donohoe by a majority jury verdict at the Central Criminal Court.

The 29-year-old, with an address at New Road, Crossmaglen, Co Armagh, will be sentenced to the mandatory term for capital murder of 40 years’ imprisonment.

Det Garda Donohoe had arrived at the Credit Union on the night of January 23rd to escort staff and cash to a night safe. However, a gang was laying in wait. When the victim stepped from his Garda vehicle, one of the gang members, Brady, ran from behind a wall and shot Det Garda Donohoe dead.

Brady later fled to the US for long periods but while there he told several witnesses, while under the influence of alcohol, that he had “shot a cop”. Those admissions were used against him during the trial, though he denied the murder and taking part in the robbery.

Garda Colm Donohoe paid tribute to his brother’s Garda colleagues in Dundalk, saying that investigating the murder of someone they had worked closely with had not been easy for them.

“This has been one of the most comprehensive investigations conducted in the history of the State,” he said, addressing the media outside the Courts of Criminal Justice in Dublin after Wednesday’s verdict in the case.

“The professionalism and the quality of this investigation has been borne out by the fact it was able to withstand the most robust and forensic examination by the defence in this case. It’s a huge credit to every single person involved in the investigation that we stand here today.”

He added all of his family were very thankful to the prosecution team, Garda investigation team and members of the US security authorities, whose assistance to their Irish colleagues, he said, was crucial in the case.

“Their dedication to this case has been extraordinary,” he said. “There were many, many challenges throughout the case and to keep it on course was a big task and an achievement in itself.

“It was not only the length of the trial but the huge volume of work for well over 12 months to get [the prosecution case at trial] to this stage was a significant achievement and we commend them.

“We’d like to thank the jury of 15 ordinary people who were sworn in at the end of January. We’d like to thank each and every one of them. Their lives have been put on hold for the last six months and the commitment they have shown through these challenging times was unbelievable.”

He added that the American Homeland Security personnel had taken on the investigation “like Adrian was one of their own”, a reference to the work they did in gathering evidence in the US against Brady, including testimony from witnesses who said Brady had told them he shot a Garda member in Ireland.

“Aaron Brady was not alone in Lordship,” he said, of the convicted killer having been part of a five-man gang involved in the incident.

“The quest for justice for Adrian will continue and we appeal to anyone, near or far, who has any information that may assist with this investigation to come forward and do the right thing and bring those involved to justice.

“While justice has been done here today, nothing will bring back Adrian to his wife, his two kids, his parents, his family, his colleagues and his friends. Adrian was a good man, it’s the very least he deserved that justice be served.”

Chief Supt Christy Mangan, head of the Louth Garda division where the murder occurred, said it was a “very important day for the administration of justice in Ireland” as Brady had been found guilty of capital murder.

He added that since the murder, a large-scale murder investigation had been conducted by Garda members in Dundalk “in order to obtain the truth and justice for Det Garda Adrian Donohoe and his wife Caroline and their family”.

“It has taken a transnational, multi-agency murder investigation and this trial to uncover the truth of what actually happened at Lordship Credit Union on the 25th of January, 2013.

“This is part one of the investigation that has now been completed,” he said, adding that inquiries into what happened would continue.

‘Knocking on your door’

Deputy Commissioner John Twomey used his address to the media at Garda Headquarters, Phoenix Park, Dublin, to directly address the other four suspects in the case and those who helped them after the murder.

“We will be knocking on your door and we will make sure you pay for this horrendous act,” he said, adding Irish society would never accept the shooting dead of a Garda member while protecting and serving the community.

Chief Supt Mangan said law enforcement authorities in the UK and Australia, as well as the Department of Homeland Security in the US, had provided valuable assistance to the investigation over the past 7½ years.

Det Garda Donohoe left for work one night and was dead hours later and the sense of “loss, sadness and grief” would never leave his wife and children and the rest of his family. He added gardaí would “never cease” in their quest to bring the rest of the gang to justice, as well as those who provided them with “comfort and logistical assistance”.