Man who killed Garda Tony Golden was not registered informer 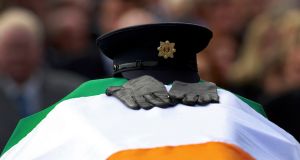 The man who shot Garda Tony Golden dead before turning the gun on himself and his partner was never officially registered as a Garda informer, The Irish Times understands.

Adrian Crevan Mackin’s solicitor has alleged he was asked by the Garda to infiltrate the Real IRA in Portlaoise Prison.

Solicitor Paul Tiernan has also questioned why Mackin was charged with membership of the IRA but not with possessing firearms even though he admitted possessing them.

If the allegations are proven and Mackin was being run or developed as an informer, procedures around the Garda’s use of informants would have been breached.

For example, all informants must be formally registered and nobody on bail can be used as an informant.

The Garda Síochána Ombudsman Commission (Gsoc) is investigating the State’s handling of Mackin’s case, including his being charged with membership of the IRA and being granted bail.

He was already serving a three-year suspended sentence on firearms charges in the North. The Gsoc inquiry is seeking to establish if the Garda was aware of that and, if so, whether those facts were presented to the Special Criminal Court when it was granting Mackin bail.

The Irish Times understands that the phone number of a Garda member was found on Mackin’s mobile phone when it was examined after his death.

The Gsoc inquiry is examining whether Mackin was in telephone contact with a Garda member and effectively being run as an off-the-books informant.

However. security sources said the granting of bail to suspects charged with IRA membership was not unusual. The same sources also pointed out that the judges of the Special Criminal Court granted bail in such cases.

“We have had suspects charged with dissident murders who have been on bail while they are on trial,” said one source.

The Gsoc inquiry is also examining why Mackin was not charged with firearms offences, despite his apparent admissions.

Membership of an illegal organisation can sometimes be a holding charge, with further more specific charges to follow. However, there appeared to a prima facie case against Mackin on the firearms charges from the time of his arrest in January, 2015, some nine months before he killed Garda Golden.

Mackin (25) was on bail for IRA membership, at the time he shot dead Garda Golden and critically wounded his partner Siobhán Phillips (22).

He then turned the gun on himself taking his own life at the home of Ms Phillips in the Mullach Álainn estate near Omeath, Co Louth, on Sunday, October 11th, 2015.

Ms Phillips survived the attack and while she suffered severe injuries, including being shot in the head, her recovery is continuing.

The report also suggested he was a Garda informer who had been granted bail in exchange for supplying information to the Garda.

His sister was interviewed, though not identified on camera, and she alleged her brother had told gardaí where he had hidden two firearms.

She said the information resulted in the guns being found in a derelict house in Co Louth. And she further alleged he told her he may need to supply similar information to the Garda in the future to remain out of prison on bail.

He had been charged with membership of an illegal organisation following his arrest in January, 2015.

The Garda was contacted by the FBI and told that Mackin had been purchasing firearms online from the US along with chemicals and other materials for making explosives.

They went to his home and arrested him. After a very brief period in Portlaoise Prison, where republican prisoners suspected he was an informer and refused to accept him on to their wing, he was released on bail.

While out he feared he was about to be shot dead by dissident republicans, to whom he supplied firearms, because they believed he was an informer.

He had a history of abuse, including physical violence, towards his partner Ms Phillips. She went to the Garda in October, 2015, and made a statement of complaint about him at Omeath station.

Having taken the statement from her, Garda Golden agreed to escort her and her father to her home so she could gather her personal items and leave Mackin.

However, when they arrived at the house Mackin was present. And when Garda Golden explained to him Ms Phillips was taking her items and leaving the house, he shot Garda Golden dead and wounded Ms Phillips before taking his own life.

He had convictions for criminal damage, possessing extreme pornography and possession of a gun and ammunition in the North. He was given a three-year suspended sentence in the North in December 2013, for the firearms conviction.