Man tries to enter Leinster House with sword and knives

No injuries in the incident as man arrested by gardaí 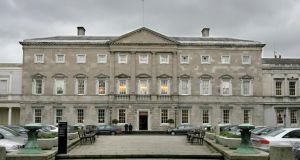 A man has been arrested this evening after attempting to enter Leinster House with a sword and a number of knives.

A Garda spokesman confirmed the 19-year-old was taken into custody “on suspicion of possession of offensive weapons at Leinster House”.

No one was injured in the incident on Kildare Street.

The incident occurred at approximately 4.30pm before the man was arrested on the front plinth of Leinster House on the Kildare Street side.

He was taken to Pearse Street garda station where he is being detained under the provisions of section 4 of the Criminal Justice Act 1984 as amended.

1 Co Clare houses surrounded by water evacuated as rainfall warning issued for most counties
2 Coronavirus: Global concern grows with sharp rise in infections outside China
3 Portraying Sinn Féin as a dangerous party is a political strategy
4 The Boris bridge: Will Johnson’s ‘vanity project’ ever happen?
5 ‘The IRA has gone and they are not coming back. That’s the reality’
Real news has value SUBSCRIBE