Stephen Fry will not be prosecuted for blasphemy

Decision ‘even more dangerous’ than a prosecution, according to Atheist Ireland

Stephen Fry gives his views on the existence of God during an appearance on 'The Meaning of Life with Gay Byrne' in February 2015. Video: RTÉ 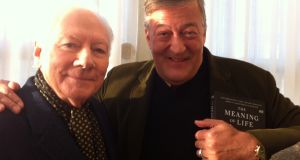 A reported decision by gardaí not to prosecute Stephen Fry for blasphemy is “even more dangerous than a prosecution would have been”, Atheist Ireland has said.

The British actor, comedian and writer made critical comments about God during an interview with presenter Gay Byrne on RTÉ in February 2015.

A complaint that Mr Fry’s comments were in breach of the Defamation Act was made by a man in Ennis Garda station more than two years ago.

Gardaí in Dublin acted on the complaint in recent weeks, after the complainant wrote to Garda Commissioner Nóirín O’Sullivan to inquire into the status of the investigation.

Chairman of Atheist Ireland, Michael Nugent, said on Monday night the reported reason for not proceeding with the prosecution was because gardaí could not find a large number of people who were outraged by Mr Fry’s comments.

“This creates an incentive for people to demonstrate outrage when they see or hear something that they believe is blasphemous,” he said. “It also shows that the police take our blasphemy law seriously, as indeed they should do, regardless of the nod and wink attitude of our legislators.”

He said we have already seen around the world what can happen when large numbers of people demonstrate outrage about cartoons that they consider blasphemous.

“We should be encouraging people to behave more proportionately when they see or hear something they find offensive, not creating incentives for large numbers of people to demonstrate outrage,” Mr Nugent said. “A referendum is now urgently needed.”

He also said, internationally, the investigation had emboldened Islamic nations who argued western countries were hypocritical in telling them to end their blasphemy laws, which impose the death penalty. And it has further embarrassed Ireland among modern democracies.

“Until we have a referendum, this absurd and dangerous law will remain part of the background noise of religious interference in Irish public life, along with the daily Angelus on RTÉ, and last week’s Dáil vote to force TDs to stand for Christian prayer every day,” he said.

The comments that outraged the complainant were carried on, The Meaning of Life, programme.

When asked by Mr Byrne what he would say if he was confronted by God, Mr Fry replied: “How dare you create a world in which there is such misery that is not our fault. It’s not right. It’s utterly, utterly evil. Why should I respect a capricious, mean-minded, stupid God who creates a world which is so full of injustice and pain?”

The footage went viral almost as soon as it was aired and a clip of his comments has now been seen almost nine million times on YouTube.

The actor, who is a prolific Twitter user, has yet to comment publicly on the garda investigation.

The offence of blasphemy, included in the Defamation Act, is punishable by a fine of €25,000 under Irish law and has its roots in the Constitution.

Last week, the Department of Justice said preparatory work had begun on a referendum to remove the reference from the Constitution.