Man admitted abuse in 1987 but was ‘not subject to police action’, Belfast court told 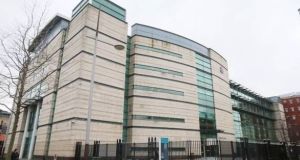 An adopted girl was abused ‘on an almost daily basis’ by her stepfather in the 1980s, Belfast Crown Court has heard

An 80-year-old man has been told he can expect to be sent to prison when he is returned for sentencing for raping and indecently assaulting his adopted daughter when she was aged between 11 and 14.

Laganside Crown Court in Belfast also heard that while the victim first reported the abuse in 1985 the prosecution case against him did not happen until 2016.

The defendant, who cannot be named for legal reasons, pleaded guilty to two counts of rape and 18 indecent assaults on dates between 1982 and 1985.

Ciaran Murphy QC, outlining the prosecution case, said the victim who is now 47 was subjected to sexual abuse “on an almost daily basis” over a three-year period. The abuse happened in places such as the family home in Belfast, at a business run by the defendant, in a garden shed, in Bundoran and in his car.

The defendant, who appeared in court in a wheelchair, made the victim promise she would not tell anyone about the abuse, which he tried to convince her was “harmless”, explained Mr Murphy.

On one occasion the defendant tried to persuade the victim to perform oral sex but that “did not occur”. Another time while driving along the M1 in Northern Ireland he suggested “she flash her breasts” at other motorists but she refused.

When she was 14 she confided in two schoolfriends about the abuse; she also told a cousin.

The court heard how around that time she became disruptive, was expelled from grammar school, ran away from home and ended up in a children’s home under the care of social services.

In 1985 she told one of the staff at the children’s home about the abuse. She gave a statement to the police but that statement was confused and she did not outline the full extent of the abuse.

The court heard how at the time she felt “she loved her father and believed he had a special love for her”.

Two years later the defendant made contact with her at the children’s home. She told him she would have no further dealings with him unless he admitted the abuse to his wife, which he did.

In August 1987 she gave another statement to the police about the abuse. But despite the defendant’s admission he “was not subject to police action”.

The defendant showed callousness and engaged in coercion and emotional blackmail and bribery with the victim in carrying out his abuse, the court heard. Around the time of his admission the defendant was advised to seek medical help.

Mr Murphy referred to an “astonishing lack of insight by the authorities at the time”.

The court was told the victim felt she had been “rejected” and “ostracised” by her adopted family. The abuse “permeates all aspects of her life and memories,” the court heard.

The North’s Public Prosecution Service reviewed the case two years ago. The defendant eventually pleaded guilty – but in a qualified manner, the court heard.

The defendant referred to his “suffering and high level of depression”. There also was a “high level of victim blaming” and a “lack of remorse and victim empathy”.

Judge Kerr, referring to a probation report, observed that the defendant appeared to believe that the victim “almost brought (the abuse) on herself”.

Mr Murphy said while the defendant had various ailments they could be addressed in a prison regime.

Defence lawyer Gavan Duffy QC said while there still was “rehabilitative work to be carried out” with the defendant he deserved “substantial credit for his plea of guilty”. He said it was likely that any custodial sentence would increase the risk of the defendant dying in prison.

Judge Kerr said he planned to impose sentence on Wednesday, September 5th. He advised the defendant when he appears in court on that date to be prepared for the likelihood of a prison sentence.