Dazzling ensembles light up Ladies Day at the Galway Races

‘You’ve so many fashionable and talented people in one place ... It’s great for inspiration’ 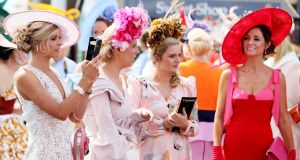 The tent is gone for good and the helicopter count may never recover to boomtime levels. But if the Galway Races is the Irish equivalent of the Big Mac index – a read of the economic pulse of the nation – there’s still a degree of confidence in the economy.

“We’re running wait lists on a couple of the days and we could have sold a lot more space.” said Michael Moloney, general manager of Galway Races. After a busy start to the week on Monday, attendance at the 150th event was down slightly on Tuesday and Wednesday. But for the week as a whole, ticket sales have been “very strong” and demand for corporate hospitality is up.

Some 1,000 people will take advantage of corporate hospitality at Ballybrit every day this week, at price tags of between €270 and €365 on Ladies Day. At the heighth of the boom, 1,500 people packed into the now-notorious Galway tent. But even though Moloney thinks he could probably sell that many tickets again, “marquees are not what we’re about anymore”.

Ladies Day also seemed to have become a less ostentatious affair than at other moments in the event’s history. It wasn’t quite a case of “thanks, Penney’s”, but racegoers were more likely to boast about having made their own hat than flash a designer label. “People are being very clever. They’re styling things to a new level. They’re adding a pair of earrings to a hat rather than buying a new one,” said boutique owner Lorna Doogue, who has come to Ladies Day every year since 2013.

This year, she was wearing a dress she made herself, and a red boater-style hat designed by a friend. “This is our Ascot or our Cheltenham. You’ve so many fashionable and talented people in the one place. It’s a great platform and great for inspiration,” she said.

Tracy Moloney has been coming to Galway for years, but this was her first time competing, wearing a dress she made herself featuring embroidered horses. “Year on year, Galway has maintained its buzz. People are still spending. The champagne corks are still popping all over the place.”

She was at the races with her friend, Sharon Kenny, who was hoping to do some business. “I’m looking for single people.” She is a matchmaker, she said. “There are so many single women here who do not go out and they come to Galway Races. So it’s easier to find women here than anywhere.”

It was also a first Ladies Day for Gemma Gleeson, who was there with her two-year-old daughter Hope. Hope was singlehandedly bucking the anti-ostentation trend in a miniature Elie Saab dress, tiny black Chanel handbag, and purple soother. “I think she’s the youngest competitor at Ladies Day. She won’t wear her hat though.”

The winner, chosen by a panel of judges including Rosanna Davison, was medical student Pamela Uba, who wore a jumpsuit and a hat from Laura Hanlon millinery.

“There’s a big focus on sustainability and recycling, so it’s been lovely to see people making their hats or re-using their outfits,” said Davison. But though the helicopters are once again circling overhead, “it’s different this time round. The atmosphere is very positive, optimistic, even despite Brexit looming.”

About 80 to 90 helicopters returned in 2017, and there were 130 landings last year, said Moloney. This year’s numbers still won’t come close to 2007, when about 700 helicopters came and went over the festival, ferrying punters who had paid €350 for the 2.5 mile round trip to and from Oranmore.

A spokesperson for Executive Helicopters said advance bookings for the races still haven’t recovered, but that’s more to do with marketing strategies and changing attitudes than a reflection on race attendance. People still take longer trips by helicopter, but “it’s not the thing anymore to take a helicopter for a short trip to the races.”

“It used to be like Vietnam, with them all coming in and out,” said bookmaker Gerry Rooney. “It’s not like Vietnam anymore.”

Still, Rooney – who has five pitches at the races this week – said “it’s definitely getting better than what it was eight or 10 years ago. It’s slowly coming back. You get the odd big punter, but they’re not betting the same amounts as the past. You’ve internet betting now too.”

But it’s not all bad news for bookies. New figures from Horse Racing Ireland (HRI) show on-course bookmakers have seen turnover increase by 11.5 per cent in the first six months of the year.

Even in more low-key times, the Galway Race Festival is worth between €55 million and €60 million to the local economy. “That equates to hotel nights, people eating out, people buying outfits, petrol money. These festivals are really important; Galway is the largest festival in terms of the days and the attendance, so it absolutely is a barometer for how the economy is doing,” said a spokesperson for HRI.

The “heyday of Galway” was 2007, said bookmaker Brian Keenan. “There was a lot of money around back then, but it wasn’t real money. But we all live in the real world. It’s not going to be the same as it was, business is tight and margins are tight. There are 360 days of racing in the calendar now and there are so many events where it’s hardly worth your while showing up. So it’s great to be at a meeting where there is a buzz and a vibrancy.”

“Crowds have been down on two days and slightly up on one day,” said Brian Graham. “But bookmakers’ turnover has been slightly up two out of the three days.”

If Brexit is having an effect, it is among rural dwellers, said Graham. “We would notice a lack of money from rural society and the farming community. A lot of our usual rural customers are not here at all. And for the rest the amounts they are betting is smaller – whether that’s Brexit, or whether it’s difficulties in the agriculture sector generally.”

But overall, he said, there are signs of confidence in the economy continuing to recover. “The champagne is back.” He pointed to the newly opened Moet bar, packed in the mid-afternoon sunshine, where bottles of champagne start at €115, and run to €240 for a bottle of Dom Perignon.

By early evening, away from the course itself, the festival had begun to take on the atmosphere of a Saturday night in Ibiza during Leaving Cert holiday season, with queues several bodies deep at every bar and food truck, and suit jackets and high heels abandoned in the still-hot sun.

“Turnover is not up to what it was 10 years ago or 12 years ago before the big crash, but that was a false turnover. We don’t need it to go back to those levels,” said Graham.