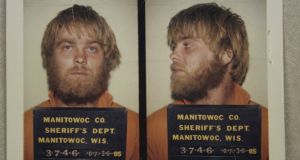 There are no available figures on how many people around the world have been watching the 10-part documentary series Making a Murderer about the exoneration and subsequent murder conviction of Steven Avery in Manitowoc County, Wisconsin. However, judging from social media and mainstream news stories, the Netflix crime series has struck a nerve.

Avery, a junkyard car dealer with an IQ of 70, spent 18 years in prison for a rape he did not commit before he was exonerated in 2003.

Two years later, in the midst of a $36 million lawsuit against the county, he was arrested for the murder of photographer Teresa Halbach.

They subsequently moved from New York to Wisconsin and spent 10 years chronicling the case against Avery and his 16-year-old nephew, Brendan Dassey, filming a narrative that included potentially planted evidence, suspected police and prosecutorial misconduct, a seemingly coerced confession and a defence lawyer who abandoned his juvenile client.

Last week, Avery filed a new appeal seeking his release after hundreds of thousands of people signed petitions calling for a pardon or a new trial.

We asked the film-makers to answer some of the questions that are on many people’s minds.

Q. A Google news search of Making a Murderer got 29.8 million hits. Why do you think this particular true crime series has captured such a wide global audience?

Demos: Although we’ve chosen Steven Avery’s story, he’s just a window into the American criminal justice system. What the series offered was for us to capture these compelling characters in these dire circumstances. It really becomes a human story and people can relate to that all over the world.

Steven . . . is the ultimate underdog here. He’s a man that grew up on a junkyard and is filing a lawsuit against the county – you know, really, a sort of a David and Goliath story.

Ricciardi: We certainly have an interest in continuing to follow the story should there be significant developments. Both cases are currently active. Brendan Dassey has a federal habeas decision pending and it will ultimately be heard by a magistrate judge who could overturn Brendan’s conviction and order a new trial and or order Brendan’s release.

With respect to Steven, he actually has a new attorney, Kathleen Zellne. I think she’s also brought on local counsel connected with the Innocence Project there.

Q. Did you actually share your work with Avery’s lawyers or were you strictly acting in the role of documentary filmmakers?

Demos: We did not share our footage with subjects. We did not want to have an impact on this case.

Ricciardi: In September of 2006, I wrote a letter to [prosecutor] Ken Kratz inviting him to participate in the documentary and we never received a response from him but, two months later, he tried to subpoena our footage and we had to hire a lawyer and file a motion to quash. Obviously, we can only speculate about his motivation. We argued to the judge that this was a fishing expedition, that he’s making baseless allegations that we’re an investigative arm of the defence and the judge ultimately ruled in our favour.

Ken Kratz, never to be deterred, is now recycling that argument and trying to claim in 2016 that we were an investigative arm of the defence, which is ridiculous.We were not advocating for Steven Avery. We were not even investigating the Halbach case. We weren’t in a position to do so. The people who were in position to investigate the case were law enforcement, the public officials who were paid to do these things.

Q. Do you think this docu-series will have an impact on Avery or Dassey’s prospects for freedom?

A. Demos: It’s hard to know what impact the series will have on their prospects. Perhaps, the more people are talking, somebody will feel safe to say something they didn’t feel safe to say before. Perhaps judges who are elected will not feel so certain that . . . they need to rule to affirm the conviction or else they’d be voted out of their role.

I think the bigger question is what impact the series could have on the justice system because that would help many more people. We need to have a system that we can rely on if we’re going to be deciding guilt or innocence.

Q. Do you believe they were innocent?

A. Demos: Obviously we have no way of knowing whether they were responsible for the death of Teresa Halbach. We weren’t with Teresa Halbach on October 31st so we don’t know what happened to her. We don’t find credible the narrative that the prosecution put forth in these cases, especially because they argued inconsistent crimes at Steven’s trial and at Brendan’s trial. There was one victim and essentially two crimes, and two crime scenes were argued. Our primary focus was not who killed Teresa Halbach. We just would have been setting ourselves up for failure. This was not a “whodunnit”, it was much more of a “howdunnit”. Was the process that led to the investigation and conviction of these men, was it fair?

Q. What were the most challenging and rewarding aspects of doing this series and how did you keep it going? A. Demos: This was a self-funded project until August of 2014, so really for the majority of production and post-production, the burden was on Laura and myself to keep it going.

One struggle was just the financial logistics . . . of working day jobs and working part-time on the series. And one of the biggest challenges, honestly, was to stay true to the format that we wanted. The networks didn’t really have a way to distribute a 10-episode docu-series.

There was also the dynamic that we were relatively inexperienced film-makers at the time. We did not have a long track record. We could not expect someone to greenlight a 10-part series so we really devoted our time to making the series and feeling that we had to demonstrate what it could be. It wasn’t about pitching it, it was about making it.

So by the time we brought it to Netflix, the timing was great. They had just launched their original documentary division and we’re thrilled with that partnership and what they allowed us to do in terms of the format and then what they were in a position to do in terms of getting it to audiences around the world.

Anne Driscoll is the journalist project manager of the Irish Innocence Project at Griffith College. For more information visit innocenceproject.ie