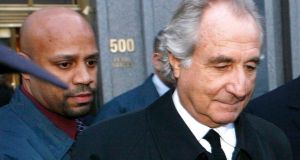 Disgraced financier Bernard Madoff (right) is escorted by a US Marshall as he departs US Federal Court after a hearing in New York in January, 2009. Photograph: Lucas Jackson/Files

An action on behalf of some of the many investors affected by the Ponzi scheme run by jailed US fraudster Bernard Madoff has settled at the Commercial Court.

Thema International Fund Plc had sued HSBC Institutional Trust Services (Ireland) Ltd — HITSI — in a case which centred on the role of banks’ as “custodians” to investment funds that deposited monies with Madoff entities.

The action, one of almost 50 here, opened before Mr Justice Peter Charleton in late April and was listed to run for some 14 weeks but settled on its 17th day today.

The settlement, announced by Dermot Gleeson SC, for Thema, is subject to the approval of Thema’s shareholders. To facilitate securing that approval, the case was adjourned to July 19th.

Bernard Madoff pleaded guilty in 2009 to orchestrating what prosecutors described as the biggest Ponzi scheme in history, using $65 billion in real and artificial assets. He admitted using money from new clients to pay off earlier investors and was sentenced by the US courts to 150 years imprisonment.

Thema operates the Thema sub-fund and was alleged to have entrusted hundreds of millions of Euro to HITSI as custodian which in turn passed the monies to Madoff. AA operates the Landmark Investment Ireland Fund and other sub-funds.

In addition to the claims by Thema and AA against HITSI as custodian of their funds, some 43 cases have been brought against Thema over its passing on of monies to HITSI.

Among the claims are breaches of HITSI’s duties as custodian and failure to carry out due diligence of the Madoff companies before those companies were made sub-custodian of the funds entrusted to HITSI.

In rejecting the claims, it was argued on behalf of HITSI it could not have discovered the Madoff fraud and that Thema had failed to scrutinise Madoff and his returns.

HSBC previously settled on confidential terms a case brought against it here by Kalix Fund Ltd, registered in the British Virgin Islands, which had claimed some US$36m.