Lawyers will be forced to suggest mediation under new Bill 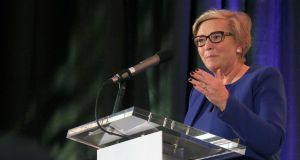 Solicitors and barristers will be obliged to advise their clients to consider using mediation to resolve disputes under a new Bill to be published in 2017.

Tánaiste and Minister for Justice and Equality Frances Fitzgerald will bring the Mediation Bill to Cabinet early in the new year.

It will introduce an obligation on solicitors and barristers to advise parties to disputes to consider using mediation as a means of resolving them.

In addition, when court proceedings are launched, it will also oblige the parties to confirm to the court they have been advised about the mediation option, and have considered it.

It is understood the Tánaiste has been keen to introduce the Bill to offer a feasible and cost-efficient alternative to court proceedings.

Mediation occurs in a more informal setting than court proceedings.

When there is a successful outcome, the associated costs are a fraction of the legal costs that would be incurred if the dispute was settled in court proceedings. The process is also far speedier.

The Bill will be received as a significant move to place the mediation option at the centre of the legal process.

The new legislation, if approved, will allow a judge, on his or her own initiative, to invite the parties to consider mediation, even after the proceedings have commenced.

It will provide for the suspension of court proceedings in such cases to facilitate the mediation process.

Mediation has been used as an informal process in Irish law for many years, with some formal statute-based uses such as for employment abuse.

But the Mediation Bill, if passed, will put the obligation to consider the option on a statutory basis for the first time.

A new body, the mediation council, will be established to oversee the development of this form of dispute resolution in Ireland.

Besides employment law, mediation has been used in commercial, property, and family law.

The role of a mediator is to facilitate both parties in a dispute to reach an agreement that is mutually acceptable.

The resolution can be voluntary, or can be made binding on both parties if a settlement agreement is signed.

The Bill will also set out broad principles on the conduct of mediation hearings.

It will require qualified mediators to inform the parties of their training and experience in the area.

The process is confidential, and the parties to the dispute will have the ability to agree how enforceable any agreement reached will be.

In a specific reference to family disputes, it also makes provision for the involvement of children in the mediation process.

Given the sensitivities involved in this area, the language of the Bill is expected to set out clear guidelines and safeguards.

An EU mediation directive has been in place since 2011, and this has been seen as international recognition that complementary systems of dispute-resolution can be more effective than court proceedings in some instances.

Another argument that has been advanced is that for the people involved in such disputes, mediation has the potential to reduce or avoid the stress involved in adversarial court proceedings.