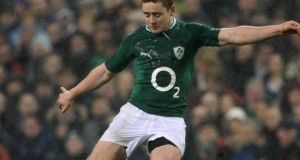 One of two Irish rugby internationals facing rape charges will be objecting to evidence from three witnesses, a Belfast court has heard.

Paddy Jackson (25) and Stuart Olding (24) are accused of sexual offences against the same woman at a house in south Belfast in June of last year.

Mr Jackson’s lawyer confirmed his client intended to challenge the testimonies of the three witnesses at a preliminary inquiry listed for a full-day on October 17th.

A video-recorded account given by the complainant may also be examined at that hearing, Belfast Magistrates’ Court heard.

Mr Jackson, a fly-half, has played for Ireland 25 times while Mr Olding, a centre, has four international caps.

The Ulster Rugby team mates are not being considered for selection by Ireland or their club while the legal proceedings continue.

Blane McIlroy (25) and Rory Harrison (25) are also facing charges as part of the same investigation.

Mr McIlroy, from Royal Lodge Road, Ballydollaghan, Belfast, is charged with one count of exposure, while Mr Harrison, of Manse Road in Belfast, is accused of perverting the course of justice and withholding information. They deny the allegations.

According to the charges, Mr Harrison made a witness statement to police in which it is alleged he lied about his dealings with the alleged rape victim and omitted information relevant to the investigation.

None of the accused were present in court on Wednesday as lawyers fixed a date for committal proceedings.

Mr Jackson’s solicitor Joe McVeigh told deputy district judge Liam McStay of the objections to evidence of the three witnesses. He also outlined potential plans to scrutinise claims made by the complainant in an ‘Achieving Best Evidence’ process.

Joe Rice, for Mr Olding, and Tony Caher, for Mr Harrison, confirmed they had received documents and exhibits that were previously requested.

Mr Rice sought assurances that the Public Prosecution Service would not handle the case in a “piecemeal” manner.

With solicitor Pat Kelly now on record for Mr McIlroy, Judge McStay agreed to hold two further reviews before the full preliminary inquiry hearing. He asked the legal representatives to ensure they carry out the necessary preparations in advanceof the hearings.