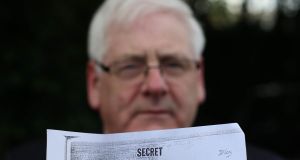 Michael Gallagher, whose son Aiden was among 29 people killed by the Real IRA in the August 1998 bombing of Omagh, is seeking to have a decision by Northern Ireland Secretary of State Theresa Villiers judicially reviewed. File photograph: Niall Carson/PA Wire

A landmark bid for a partially secret hearing over intelligence gathered on the Omagh bombing has begun at the High Court in Belfast.

Lawyers for the British government are arguing that national security-sensitive material is suitable for an application to hold a closed material procedure (CMP).

The move forms part of a legal challenge to the refusal by Northern Ireland Secretary of State Theresa Villiers to hold a public inquiry into the atrocity.

Michael Gallagher, whose son Aiden was among 29 people killed by the Real IRA the August 1998, is seeking to have her decision judicially reviewed.

The case centres on claims that a range of intelligence from British security agents, MI5 and RUC officers could have been drawn together to prevent the attack.

An alleged gap in the information relates to any monitoring of the bomb and scout cars as they crossed the Irish Border into Omagh on the day of the outrage. But counsel for the Secretary of State are seeking a CMP in advance of the legal challenge being heard in full.

That process, under powers contained in the Justice and Security Act 2013, would examine whether public disclosure of some information would be damaging to national security.

It would involve intelligence documents being assessed by a judge and a special advocate barrister appointed to protect the rights of Mr Gallagher while he is shut out of the hearing.

The first stage involves deciding whether the case is suitable for a CMP application.

The application represents the first such legal bid in judicial review proceedings in Northern Ireland.

Ahead of the hearing, a sample of the closed material was gathered and stored at a secure location away from the Royal Courts of Justice.

As part of the process, barrister David Scoffield QC has been appointed as special advocate to represent Mr Gallagher’s interests.

He can attend private hearings and examine the closed material which the bereaved father has no access to.

She decided instead that an inquiry by Police Ombudsman Michael Maguire was the best way to address any outstanding issues surrounding the atrocity.

In October 2014 Dr Maguire published a report where he found RUC Special Branch withheld some intelligence information from detectives hunting the bombers.

No one has ever been convicted of carrying out the attack, but Seamus Daly, a 45-year-old bricklayer from Cullaville, Co Monaghan, is currently charged with the 29 murders, which he denies.

Central to the judicial review challenge is a contention that the British government has a duty under Article 2 of the European Convention on Human Rights to protect lives and investigate the bombing.