Radar, telescopes and wifi elevated into the sky by kites will be great boon to Army capability 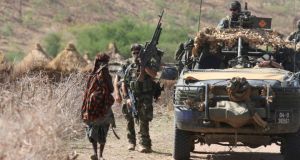 Members of the Irish Army Ranger Wing in Goz Beida in Chad: meagre manpower and difficult terrain will benefit from the ability to see via drones and telescopes attached to kites. Photograph: Aidan Crawley

While little-heralded, the significance of the battle the Naval Service is engaged in with international narcotics gangs cannot be overstated.

In recent years, a number of cocaine shipments, each valued at hundreds of millions of euro, have been seized in the waters around Ireland, with the Naval Service centrally involved.

Last September, for example, when the Makayabella yacht was intercepted about 250km off Mizen Head by the armed crew of the LE Niamh, 41 bales off cocaine valued at €350 million were found.

And, in the last eight years, cocaine with a combined value in excess of €1 billion has been seized in just four such operations off Cork.

The largest was found on the shoreline as it was being taken from a yacht at Dunlough Bay, Co Cork, which had sailed across the Atlantic.

The crew’s plan to land the €440 million shipment on the island and take it to the UK hidden in vehicles came unstuck only when a small landing craft cut out and capsized after the wrong fuel was put into the engine.

The drugs and smugglers were tipped into the water, with locals raising the alarm after spotting the bales of narcotics in the sea.

But the larger Lucky Day vessel, from which the landing craft had been launched, had travelled from Barbados with its cargo, unseen by the Irish or international authorities. Its transponder was switched off and it did not show up on radar.

Because the Naval Service has only a handful of vessels capable of long-range patrols, it has to use guesswork unless acting on intelligence.

The kite-base technology being developed will change that, however.

It means vessels such as the Lucky Day – some of which transport guns with drugs – will not go be able to stay out of reach as easily.

Only when suspicions about a vessel are confirmed – by sending an unmanned drone for closer surveillance – will the need arise for a Naval Service vessel to set out for it.

The kite-based innovation could also be used for ground-based operations.

In recent years, the Army was deployed to Chad on United Nations peace-enforcement duties. The African nation is twice the size of France but has just 400km of paved roads. A party of 400 Irish troops was charged with patrolling an area the size of Munster where an estimated 800 armed rebels were active. There was also the threat of other armed militia pouring in from nearby Sudan and Darfur at any time.

The Irish were responsible for protecting their own camp as well as hundreds of UN civilian staff working from bases in the area and a refugee camp full of people who had fled when fighting flared near their homes.

With such a range of tasks, meagre manpower and difficult terrain that became impassable in the wet season, the ability to see via drones and telescopes is obvious.

The ability to monitor events discreetly would have very clear implications for the good for the Defence Forces being deployed on increasingly robust missions to ever more complex regions while resources get tighter.