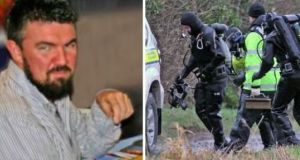 One man remains in custody in connection with the murder of Kenneth O’Brien (33) (left). Members of the Garda underwater unit who helped to recover Mr O’Brien’s torso from the Grand Canal in Co Kildare.

One man being questioned by gardaí in connection with the murder of Kenneth O’Brien last month has been released without charge after five days in custody.

On Saturday, two men were arrested in connection with the death and questioned at Leixlip and Naas Garda stations.

One man, in his thirties has been released while the second man, in his 50s remains in custody. A file is being sent to the DPP.

The arrests were the first in the investigation into the murder of the 33-year-old father-of-one.

It is understood Mr O’Brien was shot dead, dismembered with power tools and his body parts dumped in a number of locations.

Gardaí say a search operation to retrieve parts of the body which remain missing, believed to be parts of the hands, is still ongoing.

Detectives conducted a search of a landfill site at Ballynagran, outside Wicklow town, on Tuesday.

Parts of a power tool were recovered some distance away at the Royal Canal near Carton House, Maynooth, Co Kildare.

Mr O’Brien was reported missing on the evening of 15th January.

DNA analysis carried out on the body parts subsequently established that they belonged to him.

The motive behind the murder remains unclear.

Mr O’Brien was from Ballyfermot in west Dublin but had been living with his partner and child on Lealand Road, Clondalkin, west Dublin, since his return from Australia last month.

He had travelled to Australia to work while his partner and child remained in Dublin, and members of An Garda Síochána were recently sent to the country to establish further information on the time he spent there with a view to informing their investigations.

Investigating officers said they were following up some 300 leads shortly after they had established the identity of the victim following an appeal for information which prompted 100 calls from members of the public.

Mr O’Brien was described as a “loyal” and “intelligent” person during his funeral mass in Ballyfermot last week, and family members said there was some comfort to be found in the knowledge that he “died knowing he was loved and he loved us”.