‘It’s the first time I’ve been scared when he’s gone away. You see it on the TV; the chemical attack. You see the [dead] children’ 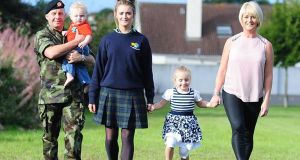 Derek and Yvonne Nugent and their children Christine (16), Holly (3) and Cian (1) at their home in Monksland, Athlone. Photograph: James Flynn/APX

Yvonne Nugent hushes her one-year-old son Cian on her knee as she thinks aloud about her husband Derek’s imminent departure to Syria with the Defence Forces.

“It’s the first time I’ve been scared when he’s gone away,” she says of the man she shares her life with, a 34-year-old corporal and father of three based in his home town of Athlone, Co Westmeath.

“I will admit I have really felt sick to my stomach. You see it on the TV – the chemical attack. You see the [dead] children.”

“At first you hear they might be going. And then at some point he tells you it’s definitely happening. And I think when you hear that your stomach drops. Do you know that feeling?”

A mother to 16-year-old Christine, three-year-old Holly and Cian who has just had his first birthday, it will fall to her to hold it all together when her husband is peacekeeping in Syria.

He will spend six months in a country with precious little peace to keep and where the US military looks ready to strike.

A working mother, Yvonne says she accepts foreign tours are part her husband’s life, and by extension her’s and her children’s too.

“You get ready by preparing to be on your own, try to get used to being more independent, like making decisions about the family on your own. You’re going to be a lone parent for six months so you need to mentally prepare for that. It’s hard but it falls into place.”

Despite Derek having gone overseas before and her own father, John Conway (63), being posted abroad with the UN peacekeeping missing in Sinai, Egypt, in the 1970s, she is still bracing herself for Derek’s departure to Syria.

“Christine is the oldest and you just try to reassure her daddy is going to be OK.”

“Holly is three years’ old now and when Derek is away in Ireland training and doing other things he would Skype a lot. And he has deliberately done that with her the last while, even from my mam’s house, just to get her more used to it.”

“She said to me the other day ‘oh, Syria, that’s a scary place’. And you’re thinking to yourself ‘how in God’s name does she know that’.”

Baby Cian does not have to be prepared for his father’s departure but Derek will miss a major stage in his development.

“You want to witness every new thing your baby does,” says Yvonne.

“Like when they start walking. Derek is going to miss that. We’re hoping he’s going to be home for Christmas. But it’s a six-month trip and it is going to be April before it’s over.”

“It’s the winter, the kids will be in school, I will be in work. It will be long. But Christine, I think, will be able to help me out, take a bit of responsibility. Some days I guess I will be here so she can talk to me and some days I will be talking to her.”

“She knows her mammy is going to need her a bit more than now. We’ve been lucky with her; I’m lucky to have her, you know?”

Derek is among 115 men and women of the 43rd Infantry whose boots will be on the ground in Syria by the end of the month.

The advance party was due to fly out this week but it emerged the night before their planned departure on Wednesday that their permits to cross from Lebanon were not in place.

The deployment has been delayed for a fortnight.

The epitome of the ambitious career soldier, Corporal Derek Nugent is a lean Army triathlon coach already with a number of challenging foreign assignments under his belt.

He says the life he signed up for when he was still a kid is geared towards the mission he is about to embark on; working abroad in a volatile and politically sensitive region.

When he first got together with Yvonne things were easier.

Even though his eldest daughter arrived 16 years ago when he was just a teenager himself, Yvonne would hold the fort back home, leaving Derek free to advance his career.

“I was only a young fella, first time away; it was exciting.”

Just two years later he packed the backpack and rifle and he was away again, this time to the UN mission in East Timor.

‘Living in the jungle’

“Living in the jungle for 4½ months, it’s every soldier’s dream. We were a tight-knit bunch over there.”

His gallop stopped a little then.

He married Yvonne and almost four years ago they had Holly. They added Cian to the growing pack a little over a year ago and now Derek Nugent is back on the market for foreign postings.

He and his colleagues will be part of the UN Disengagement Observer Force (Undof) in Syria. It was established in 1974 following the disengagement of Syrian and Israeli forces in the Golan Heights after the Yom Kippur war.

“Me and the rest of the guys just want to get out there and get stuck in,” he says.

“It’s hard leaving the family. But we’ve Skype and things like that in the camp. So I can see them every day and the kids can see me.

“When I was in East Timor Christine was a baby, you were doing well if you got one phone call every 20 days.”

He says while recent news coverage of atrocities in Syria had made the family preparations a little more fraught, he himself is not fearful or apprehensive.

He will manage a seven-man unit on the ground when the Irish are carrying out security patrols in a 75km-long stretch of land the UN monitors between Syria and Israel.

They will also act as an armed rapid reaction force that will go to the aid of any UN staff in difficulty.

“We tell the kids: ‘Daddy’s going on a plane to help the poor people, they need help’.

“Nowadays though, with Facebook and Twitter and that, stories about Syria are popping up. Christine reads this stuff, she’s very aware. She’s asking questions about chemical weapons and things like that.

“She’s probably much more in tune with what’s going on out there than the missus,” he laughs.