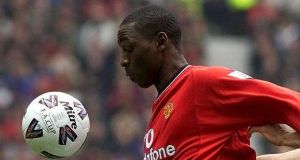 An Irishman has been charged in connection with the racial abuse of former Manchester United footballer Andy Cole on a flight from Dublin to Manchester.

He and another man, of no fixed address, were said to be drunk during the flight when the retired striker was subjected to racial slurs.

The men, both aged in their 20s, were arrested when the Aer Lingus flight touched down at Manchester Airport on Sunday.

They appeared before Trafford Magistrates’ Court today where they were charged with a racially aggravated public order offence.

In a statement, Greater Manchester Police confirmed officers were called to the airport in relation to an inbound flight from Dublin.

“Officers were responding to reports that a 42-year-old man was being subjected to racial abuse while on the plane, and that two passengers were drunk and would not co-operate with cabin staff,” a spokesman said.

Cole (42), has received numerous racial taunts throughout his career, both on and off the pitch.

He is heavily involved with the Kick It Out campaign which aims to stamp out abuse from the stands and in the dressing room.