In his first television interview after his release from prison in 2016, Jack McCullough, who has been cleared of a 1957 murder, insists that he is not a killer. Video: CBS 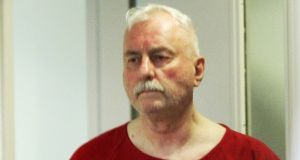 Belfast-born Jack McCullough who was convicted of the murder of a girl in 1957 after the oldest cold case trial – held in 2012 – in United States history. He has been officially declared innocent Maria Ridulph, who was killed in Sycamore, Illinois in 1957. Jack McCullough was convicted of the killing at a non-jury trial in 2012

A Belfast-born man convicted of the murder of a young girl after the oldest cold case trial in United States history, has been officially declared innocent.

Jack McCullough (77) was jailed for five years following his 2011 arrest over the 1957 murder of a seven-year-old girl. However a judge in Illinois has ruled that the accused had presented enough evidence for a certificate of innocence to be issued.

Mr McCullough was convicted of killing Maria Ridulph in Sycamore, Illinois, following a non-jury trial in 2012, which he had opted for.

A prosecutor who later reviewed the case said he believed McCullough was wrongfully convicted and he was released last year after a judge vacated the conviction.

Mr McCullough was born in Belfast during the second World War and his mother was married to a British serviceman who later died. Following the war, mother and child emigrated to the US after she met and married a GI.

The girl was abducted from near her home in December 1957, in a case which provoked national headlines and FBI intervention. She was found dead the following April.

Mr McCullough’s prosecution was based on hearsay evidence that his mother, Eileen Tessier, near death, told his estranged half sister that “he did it”.

Prosecutors also introduced three jailed people who all claimed Mr McCullough had made incriminating statements that linked him to the murder.

The judge in the case refused to allow evidence from FBI files, and other documents which the defence argued proved he was nowhere near Sycamore at the time of Ridulph’s disappearance.

Mr McCullough, who lives in Seattle,Washington, was not present for the hearing. He is now eligible for financial damages. At a hearing last week, Mr McCullough said the certificate would finally prove he was not the “monster” who killed the girl.