Tyrone march goes ahead in defiance of appeals by victims’ representatives 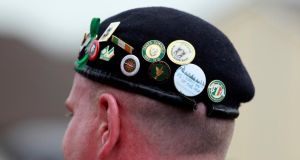 A member of a Republican band takes part in a parade commemorating dead IRA members in the village of Castlederg, in Co Tyrone. Photograph: Cathal McNaughton/Reuters 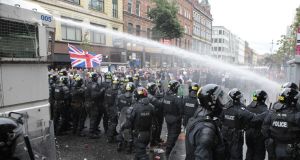 Loyalist protesters clash with riot police in the centre of Belfast on Friday.

A commemoration to Tyrone IRA members including two who died when they were killed by their own bomb has has passed off peacefully despite a loyalist protest.

The parade was opposed by hundreds of protesters, many of whom stood at a police barrier holding photographs of relatives who died at the hands of the IRA.

Others sang hymns at the nearby village cenotaph as republican bands playing “Only Our Rivers Run Free” paraded past Ferguson Crescent a short distance away.

The atmosphere was tense as police in body armour, but not full riot gear, contained the protesters, many of whom shouted angrily at the republicans carrying the tricolour, flags of the four provinces, the starry plough and other emblems. Many wore Tyrone GAA or Celtic shirts.

The protesters were supported by some senior DUP members, including Stormont industry minister Arlene Foster, and by Traditional Unioninst Voice leader Jim Allister.

Also in attendance were senior figures from the Parades Commission which rules on contentious marches and had ordered the re-routing of the parade away from the village centre where the war memorial stands.

Several hundred police blocked the 100-metre gap between the parade route and the many protesters who were also marshalled by members of the loyal orders in high-visibility jackets.

One man attempted to break through the cordon but he was quickly apprehended. A police helicopter monitored proceedings from overhead.

Northern Secretary Theresa Villiers had called for the march to be called off given what she called “the deep pain this parade will cause the families of victims in West Tyrone area and the rest of Northern Ireland”.

Loyalists riot in Belfast ahead of controversial parade

“All possible support must be given to the police in upholding the rule of law and acting to keep the community safe at this tense time,” she said.

One loyalist victims’ campaigner, David Kerrigan, said: “There is no use talking to them, they have set relations back in this town 20 years.”

The parade made its way to a housing estate in the village where a new memorial had been erected to IRA members from the county who had died during the Troubles.

The unveiling ceremony was attended by senior Sinn Féin members including Gerry Kelly, Francie Molloy and others.

Relatives of the dead IRA men, including Seamus Harvey and Gerard McGlynn who were killed by their own bomb, read tributes to their loved ones.

Similar addresses were made in tribute to the IRA men named on the republican memorial.

Mr Kelly said he had listened to the growing calls for the republican commemoration to be called off which he said were “attacks on the memory and integrity” of republicans.

“Let me state this clearly at the start: No Unionist MLA, councillor, MP or minister; no loyalist paramilitary or Loyal Order spokesperson — no matter how loud they shout, will prevent me or any other Republican honouring our comrades who gave their lives in the struggle for Irish freedom and equality,” he said.

“The Republicans and Nationalists of Castlederg and Aghyaran and of Tyrone remember the oppression of house raids, harassment, internment, collusion, imprisonment and shoot to kill. They also remember when the RUC, UDR and British Army in their thousands tried to prevent the dignified burials of our comrades killed in action.”

Protesters who ran amok through the streets of Belfast on Friday night, attacking police with missiles including scaffolding poles and paving stones ripped up from a main shopping district, have scarred the city’s reputation, Northern Ireland’s chief constable Matt Baggott said yesterday.

Mr Baggott has issued a challenge to politicians and community leaders to act like “statesmen” in the wake of the disorder, to unequivocally condemn those responsible and help to prevent further violence erupting.

The violence erupted in the Royal Avenue area, a usually busy commercial street close to City Hall, as more than a thousand loyalist demonstrators gathered to protest at the republican rally to mark the introduction of internment without trial in Northern Ireland during the Troubles. Four officers required hospital treatment.

Police, who deployed water canon and 26 plastic baton rounds in a bid to quell the unrest, have arrested seven people so far, but have warned that many more will follow. “I know that 99 per cent, if not more, of the population will stand with me in utterly condemning those who scarred the reputation of our beautiful city last night,” said Mr Baggott. “Those people had no intention of peaceful protest, they lack self respect and they lack dignity.”

Mr Baggott, who warned that the “prisons would be bulging” once the police had identified and arrested those responsible, added: “The only voices we should hear now are those unequivocally condemning the violence and supporting fully the actions of the police and the rule of law and I don’t want to hear any excuses for the disgraceful scenes that took place last night, because quite frankly there aren’t any.”

The trouble broke out as the city hosts thousands of international visitors attending the World Police and Fire Games.