Inspector says influx of drugs into prisons a ‘major issue’ 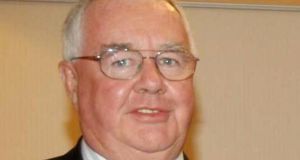 Judge Michael Reilly: “The Irish Prison Service should, as a matter of urgency, examine its procedures with a view to defining a streamlined response to ensure compliance with best practice in scene preservation, bearing in mind the necessity to preserve life.”

The continuing influx of drugs into Irish prisons is a “major issue” and innovative ways of addressing it are urgently needed, the Inspector of Prisons has said.

Judge Michael Reilly made the remark in a report into the death of a 30-year-old man who died in Mountjoy Prison in April last year after taking drugs. The report was one of 12 published yesterday into deaths last year of people who were in custody or on temporary release at the time of their deaths.

In a report into the death of a 26-year-old man by suicide in Mountjoy, Judge Reilly recommended that the Irish Prison Service should, as a matter of urgency, examine its practices for alerting the emergency services with a view to ensuring that in an emergency, such services are alerted as soon as is practicable.

This followed the finding that one prison officer did not call for an ambulance as he believed one of his colleagues had done so, although the delay in calling an ambulance had no bearing on the outcome of this case.

In the same case, Judge Reilly said it was a “cause of concern” that after the death, a large number of prison staff and other officials entered the scene of the death and remained in the vicinity, which had the potential to contaminate the scene.

“The Irish Prison Service should, as a matter of urgency, examine its procedures with a view to defining a streamlined response to ensure compliance with best practice in scene preservation, bearing in mind the necessity to preserve life.”

Minister for Justice Alan Shatter offered the families of the deceased his sincere condolences. He said he hoped that the reports on the deaths would go some way to help clarify matters for them.

“It is important for all concerned that there are no questions left unanswered when a person dies in State custody or on temporary release,” he said in a statement. “It is also important that we have complete transparency and, if issues arise or deficiencies are identified, to ensure they are addressed and that we learn from them.”

Mr Shatter said he had been advised by the director general of the Irish Prison Service that any issues identified by the inspector in his reports were being addressed.

The reports published yesterday deal with 12 of the 16 deaths in custody last year. Of the 12 deaths, nine occurred while the prisoners were on temporary release. The remaining three prisoners died while in custody in Mountjoy.