‘It is so encouraging’: Donation page set up to help cover €70,000 worth of damage 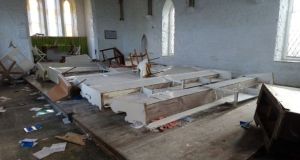 The ransacked Holy Trinity Church of Ireland church on the Errislannan peninsula in Connemara, Co Galway

The Church of Ireland community in Clifden, Co Galway, whose church was extensively damaged by vandals has been inundated with offers of help.

Damage to the Holy Trinity Church on the Errislannan peninsula, which is usually used during the summer months to cater for visitors and others, is estimated at €70,000.

Canon Stan Evans, who is charge of the parishes of Errislannan, Clifden, Roundstone and Moyard, said parishioners are humbled by the reaction by the local community.

He said he received over 200 calls on Thursday after news of the attack spread, with people all over Ireland and abroad getting in touch to offer support.

Support has come from the Archbishop Michael Neary of Tuam, local politicians and regular visitors to the area, including RTÉ’s Ryan Tubridy.

A gofundme page has been set up and at the time of writing, more than €4,000 has been raised.

“It is so encouraging,” said Canon Evans.

“People are offering to come and help but we can’t do anything at the moment because we are waiting for the gardaí to finish with the site and also the loss assessors are coming on Tuesday.

“After that the church committee will come together and we will draw up a plan as to where we go.

“We have had offers of three organs that people noticed were damaged in the photographs. We had a man offering to put in a sound system for us but there isn’t even a sound system at Errislannan because it is such a small church,” he said.

Canon Evans said Ryan Tubridy was “absolutely devastated” when he heard the news. “Ryan just said that he hoped that there would be an appeal launched because he would want to contribute to it and he asked others to do likewise,” he said.

Canon Evans is determined to have the small church returned to its former state by next Easter.

Local Fine Gael councillor Eileen Mannion, who is chairperson of Galway County Council, said the attack has tested the resolve of people in Clifden but the local community has come out in force.

“It looks like a random attack, nothing like that ever happened around there before. It’s really out of character,” said Cllr Mannion.

“Everybody is very shocked still. Nothing ever happened there before in Errislannan because it’s such a quiet area. But the good thing to come out of it is everyone has rallied together,” she said.

Archbishop Neary said the attack on the church was an attack on Christians everywhere.

“Over the last 12 months there has been high profile media coverage of the desecration of Christian churches in Iraq and in the Philippines. These actions are a physical threat to worshipping Christians anywhere in the world,” he said.

He said the images of the vandalism in Clifden were “distressing”.

“This damage is not just a criminal act, rather it is an act motivated by anti-Christian sentiment and is a challenge to freedom of religious expression in Ireland today,” he said.

“Religious freedom is at the heart of human rights and not without cost.”

Gardaí at Clifden (095-22500) have appealed for any witnesses to come forward.